The Second Act of Her Life as Beautician/Singer

Last month, during our search for fashionistas on the street, we met a person with a beautiful smile for everyone adorning an exotic look. Although she did not speak in fluent Korean, her attitude and facial expression gave out something familiar to Koreans. In response to our curious look, she said, “my mom is Korean.” She is Yolanda, whose Korean name is Eunsun. 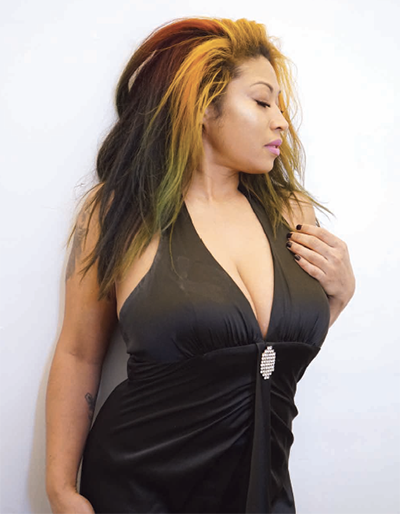 She is a singer performing under her stage name Blazia (black + Asia) and has a look of a fashion model. While she has not made the top of music charts, her self-written songs and music videos clearly show her passion and professionalism. Already a mother of two, she started her music career at a bit late age in pursuit of her lifelong dream. She has worked as a beautician for 15 years and will continue to work on her talent, which she probably inherited from her mother who ran a beauty salon in Hawaii.

We wanted to learn more about her because of a hunch that there must be something interesting about her life. And it was definitely the case. Throughout the three-hour long interview, her story captivated us. Often, a life of our neighbor can move us more than the great men and women of history.

Yolanda was born in South Korea. She lived in the city of Incheon until she turned four. Yolanda says, “I spoke Korean very well at the time, for a four-year-old girl, of course (laugh).” She also speaks of her memory of all family members sleeping together on sleeping pads laid on the floor instead of beds. “While it’s a remote memory, those moments in South Korea flash from time to time,” says Yolanda, refreshing good and bad memories from her childhood in South Korea. Bad moments were mostly related to the incidents of hearing insults associated with her dark skin color. At that time, it seems her biracial appearance was not very welcomed in South Korea. Nonetheless, Yolanda smiles for us, saying there were more good moments than bad.

At her age of four, Yolanda moved to Hawaii. Her mother opened a hair salon and worked day and night. “My parents were not equipped to protect us from crime or racial discrimination. Making a living was the top priority. However, for the same reason, I grew up to become an independent and responsible adult of today.” After moving to Hawaii, her life was not very different from a typical family of Korean immigrants. She experienced cultural shocks, and because her parents were preoccupied with the livelihood, she had to deal with many things by herself.

After graduating high school, she got a hair license and started working in the beauty industry. She enjoyed trying different cuts, colors, and treatments for hair, and her talent was recognized by many. She lifts up her hair to reveal the multi-color highlights, including red, yellow, and green, that showcases her skills. 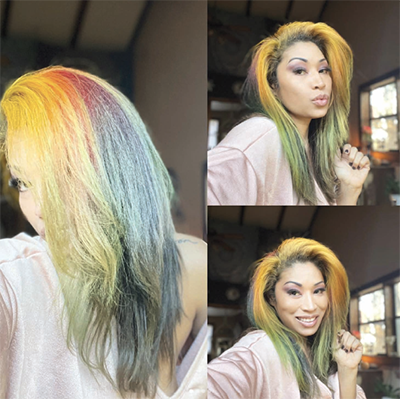 The hair colors are certainly noticeable from a distance. She did her own hair with her techniques developed throughout 15 years of her career

She often visits the beauty supplies. “Beauty supplies are where you can find a lot of different products at great price. Sometimes, I wish there is a specialty shop offering weaving hair or chemicals in or next to a beauty supply store.” She is also a regular customer for thrift stores. She loves the excitement that her fashion sense gives another life to something that was no longer worth keeping it for someone.

She says, “I am a beautician whose livelihood depends on making someone’s appearance more beautiful, but still I believe the most important thing is self-confidence and the inner-beauty. It’s sad to see people who blindly follow the European standard of beauty, such as fair skin and blonde hair. A style that suits yourself, and your belief in it and respect to yourself, these are more important. I love and cherish myself. I sincerely hope that my families and customers do the same thing.”

There is a reason that she has such a high self-esteem and self-love. She lived diligently and honestly, which solidified her self-trust. At 26, she moved to have a new family in Georgia, and her pregnancy made her think about her life once again. She started taking courses at college, and she received a graduate degree at 34. For a high school dropout who obtained the diploma through GED, it was such a dramatic moment. “I moved from Hawaii to Mississippi where I attended high school. It was a whole new world for me, and I could not make it. However, resuming my schoolwork later on was fun. Marketing courses I took at graduate school helped me a lot for running a hair shop.” While raising a child and running a business, she managed the graduate school and gained self-confidence.

Meanwhile, Yolanda’s mom opened a Korean food restaurant and started volunteering for the Korean community. Her mother is Jungsook Han who leads Yesana Mission, a Christian missionary group in Georgia. Ms. Han runs a kitchen for the homeless and distributes clothes and supplies on the street. She has paid tribute to the Korean War veterans by delivering appreciation plaques. For her 16 years of volunteer work, she received the South Korean Foreign Minister’s Award on the 15th Day of Koreans. 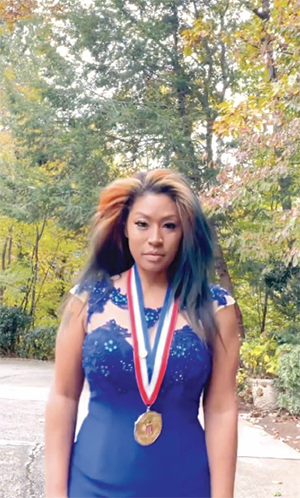 On the day Ms. Han received her award, Yolanda posed with her mother’s medal on her neck

“Sometimes I could not understand my mother who put her volunteer work above her family. We were hardly making a living, but she spent much of her effort in helping others.” While she complains it, she confesses her love of helping her neighbors in need. Is it in her DNA? She is making songs delivering messages for world peace, such as “We are the world.” In the midst of her busy schedule, she makes sure to participate in Yesana’s activities. After the Atlanta Spa Shooting, she delivered messages to stop the hate crimes against Asians via her YouTube channel.

When she was told that she looked young for her age, she said, “I always try to have a younger mind.” She still has dreams and tries to realize her potential for new things that make her heart beat. The passion is what drove her into a new challenge to become a singer. “I thought I would regret if I did not try. If you think with your brain, you would not do it. As I started to sing and share it with the public, I finally got off the phantom’s chase. This is why you should do what you want, right?”

“It’s not that I want to be a superstar. I just want to do what I like and enjoy. If I can make the world more peaceful place through my songs, it would be great. If you keep working hard on each stroke, you may someday complete a masterpiece. I want to tie the communities together and heal the people who lost hope in the world like drug addicts. That is my dream.”

Please support Yolanda’s (Eunsun’s) dream as she embarks her new journey as a beautician/singer!