Until the Day We’re Listed on NASDAQ…

Until the Day We’re Listed on NASDAQ…

President Eunho Kim was born in 1974 and graduated from the Department of Polymer Engineering at Bugyeong University. In 1999, shortly after graduating from college at the age of 27, he came to the U.S. and worked for an eyewear company, clothes wholesaler, and etc. in Miami, Florida. In 2003, he moved to Georgia and worked as a beauty supply employee and manager for about three years. There, he met his wife, Mikyong(now Director of Atlanta Korean Traditional Music), married her, and now has one daughter. Shortly after their marriage, he opened his first Beauty supply store in downtown Atlanta.

Last year in July 2020, with two partners, he founded “Beauty Now”, a large beauty supply establishment. They are also looking forward to opening a 3rd store soon after the 1st and 2nd stores. In total, he is operating five stores, including three self-managed stores(Miky’s Beauty) and two co-managed stores, and it will become six stores, as the third co-managing store will open soon. In 2019, after taking office as President of UGBGA, he successfully served as President of the Association for two years, and his term is about to end. BNB reporters met him in the UGBSA office and listened to his life, business philosophy, and association activities.

After graduating from college, Mr. Kim moved to the United States somewhat impulsively, admiring the “American dream.” “A friend who lived in the United States was trying to start a glasses business, and he asked me half a jokingly to join him. I decided immediately without thinking and packed my immigration bag. I told my parents that I was going on a trip, and came to Miami. And then the hard immigration life began. It was a reckless immigration.” He said that when he came to the United States, his life was not as easy as he thought. “When I kept my H1 visa status as a polymer engineering major in the U.S., it was a continuation of hardship with no money left after paying taxes that were set high because of the high salary standards.” He wrapped up his tough Miami life and moved to Atlanta in 2003, with new dreams, youthful energy, and passion.

After moving to Atlanta, he got a job in Beauty Supply. After working hard at a business that operated more than 10 beauty supply stores at the time, he was promoted to manager in a year, and learned the know-hows of operating the store from his boss. “I was fascinated by the charm of this business, and after a while I set up my own shop. As a result of working hard 14 hours a day, from 7: 00 in the morning to 9: 00 in the evening, my efforts finally showed. America being the “land of opportunity” was a real thing after all. At that time, lace wigs from Motown began to gain popularity and were sold out as soon as it was in stock.”

By the time store No. 1 became a steady business, Mr. Kim decided on something huge- launching another store in the same mall. “Everyone opposed to it. they told me only a fool would open another beauty supply store right next to his own store.” However, Mr. Kim made a good success. This was because the strategy of specializing in wigs in the new shop was effective. “As soon as it opened, it was a jackpot. We had phone orders coming in from out-of-state by word of mouth… Some customers bought items from our store as wholesale and sold them. Some also sent a few dozen wigs to relatives in other states.”(Editor’s Note: Currently, store No. 2 and No. 3 have been sold or closed, only No. 1 is operating in downtown Atlanta)

Store No. 4 in a Caucasian Neighborhood

Two years after the success of the second store, Mr. Kim opened a fourth store in a neighborhood where there were not many African American customers. “People opposed to this as well. There wasn’t a successful Korean store in white beauty supply business, not to mention opening another store was to early for me. They were right at the time. Until then, white beauty supply had their own connections that were too solid for Korean people to penetrate.” It was difficult to overcome the hard and high barriers of white beauty, as it was their own league. However, one by one, Black customers began to come. Then the store turned into a busy Black beauty supply store and stabilized safe and sound. “A few Black customers became dozens, then the store began to get busy, and white products were exchanged to black products.”

Joint management business Beauty Now store No. 1 and No. 2

After opening 4 stores (8,000 sf), Mr. Kim closed stores 2 and 3, and opened a large store of about 30,000 sf five years later. Store No. 5 opened as a huge beauty supply in the place where WalMart was originally located.  “There are many larger stores now, but at the time, it was uncommon for a beauty supply to be big as this. Everyone tried to stop me from doing it. They thought it was too big. I was also worried about how to fill the huge place with products, but soon, I lacked space to display them, and I had to move stuff around to cram products here and there.”

Doing Business with Others Will Lead to Failure??? Aiming for Nasdaq!

Mr. Kim has recently gathered two partners that are like-minded to open a series of businesses and attempt chain stores. Currently, they have opened two stores in the Metro Atlanta area under the sign “Beauty Now,” with an area of 10,000 sf and 27,000 sf, respectively. Now the launch of store No. 3 is just around the corner. “This was something that even my parents in Korea used to oppose. They called me everyday and tried to talk me out of it. They said business partners will lead to losing money and friendship, because doing business with parents or siblings fails miserably most of the time, too. However, Mr. Kim says that because he works with two business partners with nothing in common except age, it creates a synergy effect and complement each other’s shortcomings. “All the people I work with are owners of businesses who have at least 20 years of experience in this industry. We have extremely different business styles and characteristics. However, I like this difference the most. Each person is an expert in hair, goods, and chemical items, respectively. There are many things to learn from each other.” It has only been about a year since they started business, so it is still early to name it a success, but they have been relatively successful and quickly stabilizing their business. “We want to make it a chain. And our final goal is to grow into a Nasdaq-listed company. It may be too much of a dream, but I’m serious.”

“I Won’t Listen to Those Who Have Never Tried…”

What successful people have in common is that they overcome their fear of failure and constantly challenge themselves. The road Mr. Kim walked is no exception. Mr. Kim recently gave an online lecture to students in Catholic Kwandong University in South Korea about his challenges and successes, and the following is the message he gave to the students in that lecture. 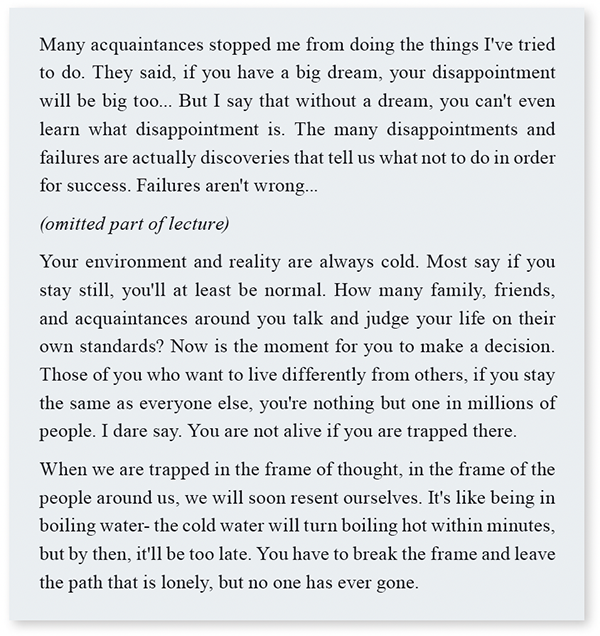 “Give Me Stale Bread, But Give My Employees Freshly Baked Hot Bread…”

Mr. Kim’s store has many long-term employees. For example, the manager of store No. 1 is a person who has been working with Mr. Kim for 18 years from being a normal staff member. Mr. Kim is a popular owner among employees. Mr. Kim, who likes to make relationships with people, is friendly and considerate of his employees.

“The three major factors that employees consider important when working are ‘salary, commuting distance, and the owner.’ The things I can do about salary and commuting distance are limited. The thing I can do is the owner. They have to like me. As a owner, you must respect and trust the staff and always be warm and good. when we have a staff get-together, I don’t save money and order the best menu. I take care of various events. I have a snack corner in the store. Drinks are also neatly lined up in the large refrigerator. I treat them with the mindset of “Even if I eat stale bread, I will serve freshly baked bread to other employees.” The company provides a car for commute, but for those who come to work in their own car, I pay a separate transportation fee. That’s why there are many people who have left my store for a new job, but came back.”

A Business Popular with Wholesale Salespeople

Mr. Kim has no shortage of products in the store, even in the current supply situation. This is because there is enough stuff already stacked in the warehouse. Mr. Kim normally can’t refuse when salesmen ask for an order. Therefore, he is popular among salespeople. In addition, he takes interest in their personal affairs, eats with them, and maintains a good relationship with them. If he ever has a salesman come to the store to buy things, offer them at cost of purchase. As expected, in order to secure products well, you must first take good care of people. Kim is a natural business man who says, “It’s better to have goods packed up than to have money packed up.” Sometimes he ordered too many things to the point that his wife complained about it. ”There are some products that didn’t go well, but that’s fine because they can all be sold through discounts and promotions.”

How it Feels to Resign President

“As president of the association, I often went home late every day and sometimes neglect the store. I first thank my wife for filling my empty seat and her generous understanding. Also, I thank my advisers and directors who accepted and assisted such a young and flawed president. Thanks to their help, I was able to finish my term safely. I am glad we were able to hold a beauty show in the midst of hard times, fill in the warehouse of the association, and hand it over to the successor executive. I hope that all of the beauty industry will continue to think broadly and continue to develop by helping each other, not just counting interests and calculating everything. Thank you.”