In this era of pandemic, many brick-and-mortar retail stores are struggling, but there are retail stores that keep rewriting growth records as if they are driving on the Autobahn. They are dollar stores: Dollar General, Dollar Tree, and Family Dollar to name a few popular ones. They sell household goods at affordable prices ranging from $1 to $5, and at a glimpse, you do not find much relevance to the beauty supply industry.
What if these one-dollar giants with 33,000 plus retail stores nationwide keep growing and become a retail outlet for beauty and healthcare products as well. It is not purely fictional. These large dollar store chains with a strong local presence are already preparing for healthcare services and developing their private label cosmetics.
Get ready for a fight with Goliath before it’s too late! BNB planned two series articles to discuss the driving force of dollar store’s success and the ways to compete with them.

They are within 5-mile radius from your residence.

Based on the number of stores, Dollar General is leading the pack with 17,266 stores in 46 states, followed by Dollar Tree with 15,686 stores in 48 states and 5 provinces of Canada (7,880 for Family Dollar and 7,806 for Dollar Tree). If you combine two companies’ stores, it would be more than Walmart and McDonald’s combined.

Actually, the dollar store’s main strategy is to get close to where people live and attract local traffic as a community discount store grabbing for the niche created by the two retail titans Amazon and Walmart. Walmart has 4,743 retail stores as of January 2021 across the country and claims that 90% of U.S. population lives within 10-mile radius from one of their stores. However, Dollar General allegedly covers 5-mile radius while Dollar Tree and Family Dollar are comparable in coverage. If you only calculate the numbers, you can imagine passing by three to four dollar stores on your way to a Walmart store.

Unstoppable growth of dollar stores despite the pandemic

The increase in online shopping during pandemic led to widespread closures of retail stores, but the three biggest dollar store chains added many new stores in the same period.
According to a research performed by CoreSite, the trio, Dollar General, Dollar Tree, and Family Dollar, accounted for 45% of 3,597 new retails stores in the U.S. announced so far this year. 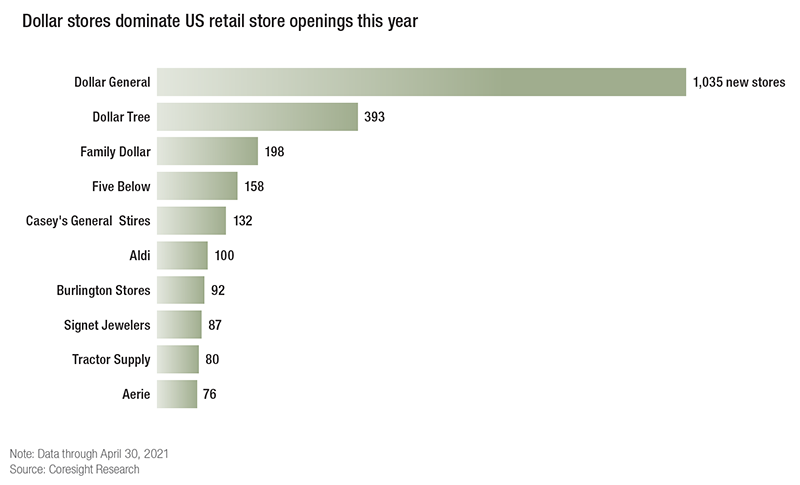 Especially, Dollar General, the biggest retailer in America by the number of stores, set the record for 29 consecutive years of revenue growth in this Amazon era and continues to grow at a great pace with 33.75 billion dollars in revenue. 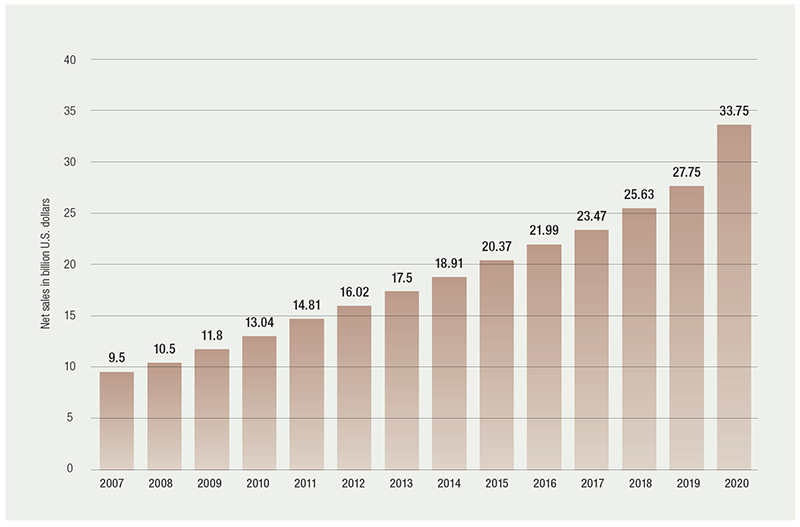 Now you should wonder. What is behind the unstoppable growth of dollar stores?

Affordability is the key

One of the main reasons for dollar stores’ success is that they came with products that meet the current consumer trend, a great quality-price-ratio. Dollar stores sell groceries and household items at a 20-40% discounted price. There are a few strategies allowing this.

Dollar stores run its retail stores at a place with low rent and tend to have a smaller retail floor and a standardized floor plan, which results in low overhead. Compared to average 105,000 sqft. for a Walmart store, Dollar General’s average is 7,400 sqft.  Also, they limit the number of items they carry at around 11,000 to increase competitiveness and forgo spending on advertisement and promotions. At the same time, they invest in development of private labels to stay competitive in pricing.

To summarize, dollar stores keep price competitiveness by running smaller stores offering only necessary services, carrying a smaller number of items, cutting the number of employees, and maintain the lower price as much as possible.

Quick and flexible market strategy to close the gaps 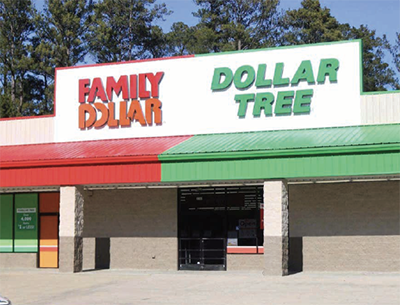 As mentioned above, dollar stores target a different demographic than big box retailers. They targeted remote areas lacking big box stores and also low-income households in the suburbs. They have come up with affordable products that fit the limited budget spending including government subsidies, which established a stable source of revenue.
The main customers of dollar stores, who are called Best Friends Forever by Dollar General, have lower than 40,000 annual income per household. Centered around this demographic, they open stores and carry items sold for less than 10 dollars. At the same time, they readily shift the focus of products and display based on the income levels and preferences of the local community.

High mobility is another key strength. When a dollar store finds an opportunity, it moves quickly. An opening of a Dollar General store takes 8 days from scratch, and the average store opening cost is 250,000 dollars. Hence, compared to other big box chains who cannot move or remodel easily, dollar stores can relocate more easily according to operational outcome.
Based on these advantages, there are many stories reporting dollar stores that have rooted in the center of local communities.

They now have private label cosmetics.

Dollar stores’ private labeling is a high volume low margin strategy that cut off the distribution margins by purchasing directly from manufacturers and sell items at a low price. As consumers’ interest in beauty products grow, dollar stores set their feet in the low-price cosmetics market in addition to aggressive R&D in private labels.

Dollar General launched a private label as early as 2019: Believe Beauty in collaboration with a beauty blogger. The brand launched with lipsticks, eye shadows, foundations, nail polishes, skincare accessories; most of them priced at under five dollars. Dollar General displayed up to 150 cosmetics products including Believe Beauty brand products in the largest section on the retail floor for an easy spotting. It is designed to enhance profit margin while maintaining the customer base with cosmetics because the popularity of beauty bloggers would attract new millennial customers to the store.

Last year, the cosmetics was 91.7 billion dollar market with a continued annual growth. While they only accounted for less than two percent of the total revenue of dollar stores, their profit margin is higher than 80% of other products in a dollar store. Dollar stores are expected to enhance their cosmetics aisle. As such, beauty supply stores are facing a competition against the dollar stores in addition to the pharmacies.

Dollar stores in America have existed over past sixty years and evolved constantly. Initially offering items with long shelf lives and low cost maintenance such as frozen pizzas and potato chips, they established large retail presence. Now, they are diversifying their business into fresh foods, cosmetics, and healthcare. Expanding beyond the remote regions and suburban centers, they are taking over big cities and the West Coast. Also, they are increasing their digital footprints to stay relevant in both online and offline retail.

Their makeover is not unprecedented. After years of occupying the niche markets amongst retail giants, they are now threatening to become another large retail contender for beauty supply stores rooted in local communities.

Once it was, but now it isn’t. 5 misconceptions about a dollar store

1. All products are priced at a dollar.
Dollar stores can be divided into two categories. Dollar Tree, on one side, sells almost everything at lower than a dollar whereas Dollar General and Family Dollar have many products that are over a dollar. In case of Dollar General, one-dollar products account less than half of their offering.

2. Only low-income consumers shop there.
Around the great depression in 2008, they acquired many middle-class households as regular customers. According to a survey conducted by Inmar in 2018, 21% of dollar store customers had an annual household income of 100,000 dollars or more.

3. They only sell fast food and instant food items.
In fact, frozen pizzas and instant meals occupy the retail floor. However, many big chain stores start to offer healthy foods, and some of them carry fresh produces.

4. Dollar stores sell clearance items.
There was a time they sold clearance items and overstock items. However, in these days of increasing influence of dollar stores, many consumer good giants like P&G and Coca-Cola offer dollar-store exclusive products.

5. They are only in a remote area.
It is true that they tend to open stores in remote places and small towns. However, Dollar Tree has many stores in the cities and suburbs, and Dollar General is expanding onto the urban areas.