Understanding Black culture; the first step to approach your customers

Understanding Black culture; the first step to approach your customers

Avoid taboos and acknowledge their identity

Cultural sensitivity is now becoming a hot topic globally. It is not simply about abolishing racial discrimination but also moving beyond the status quo to understand and embrace other cultures. In literal sense, it calls for you to have or display an appreciation of cultures foreign to you. Due to globalization, migration, and even frequent traveling across the borders, the importance of education for cultural understanding and sensitivity is increasing. 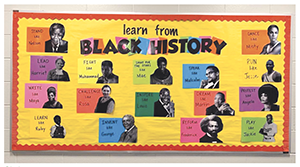 In America, school-aged children have hands-on opportunities to experience various cultures early on beginning in preschool. Schools also celebrate Chinese Lunar New Year and hold carnivals for students to learn about food and culture of different countries. Every February, Black History Month, gives American people a time to look back and tell a story of African American history. Each historical era has people who fought for justice and equal rights against racial discrimination, and learning about them can give you an informed perspective of Black history in the U.S.

America is a country of immigrants with mixed culture, race, and ethnicity to the extent that it’s called a melting pot. However, according to the 2021 World Population Review, Caucasians still constitute the majority of the American population. The proportion of White Americans exceeds 60% of the total. In 2022, the US Census Bureau estimated the 2021 Black population in the U.S. at 49.58 million which was 0.7% more than 14.2% in 2020.

If you work in the beauty supply industry, you are likely to expect a higher proportion of the African American population because you tend to meet a lot of Black customers and workers while doing business. However, still African Americans are a minority in the U.S. That’s why they are trying to make a single voice. They know the voice can be louder if they speak in unity. That’s why they tend to sympathize more with other’s experience of racial discrimination and react coordinated.

Last month, BNB Magazine discussed the improvement for beauty supply retail stores based on Google Reviews in “Good Review, Bad Review” printed in the August 2022 issue. Most bad reviews centered around the suspicious look where customers say “[the owner or employees] look at me like a thief.” 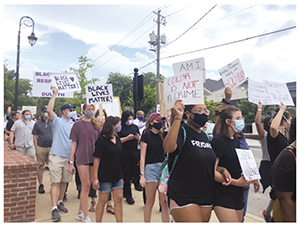 Since the Black Lives Matter movement has swept the country, their voice is only getting bigger. They are making organized efforts to improve civil rights, promote black-owned businesses to increase economic influence, and have a bigger voice in many issues.

Hence, if you are in the beauty supply industry, you should hone your Black culture sensitivity. You need to make sure you know what they want, what they need, what alienates them, what opens their hearts, and so on in order to prevent them from walking away from your business. Here are some keywords to understand African Americans. 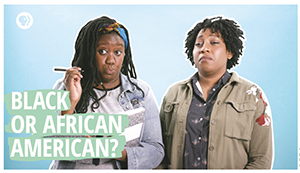 A screenshot from a PBS program asking, “Are you Black or African American?” ©PBS

As of today, in America both “Black American” and “African American” are in use. Another term “negro” has been dropped from all forms used by the Census Bureau since 2013, and it no longer appears on census data. It originated from the 1900s and used for more than a hundred years, but the 1960s’ Civil Rights Movement has persuaded the public away from it. Since then, Black or African American is commonly used. Although some people consider Black to have a negative connotation, it seems to no longer be the case. In fact, in the early 2010s, in a survey conducted by NBC and the Wall Street Journal, by about a 7% margin, people preferred Black to African American. 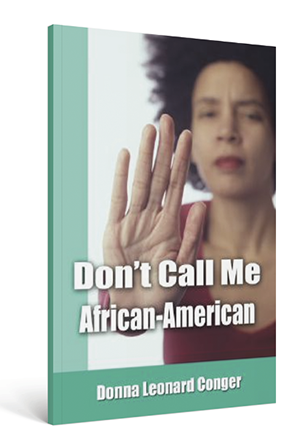 Shawn Smith who works as an accountant in Houston explained that he was born between parents from Mississippi and North Carolina, who never mentioned Africa to him or try to pass down any knowledge about it. Thus, he prefers the term Black instead of being associated with Africa because of his skin color. Entrepreneur Gibré George from Miami started a “Don’t call me African American” campaign on social media in 2012. He said, “although we respect African heritage, it does not represent us. We have changed through many generations, and younger Black Americans have little association with the term.” Author Donna Leonard Conger also published a book titled “Don’t call me African American.”

Where is the Black population growing most? 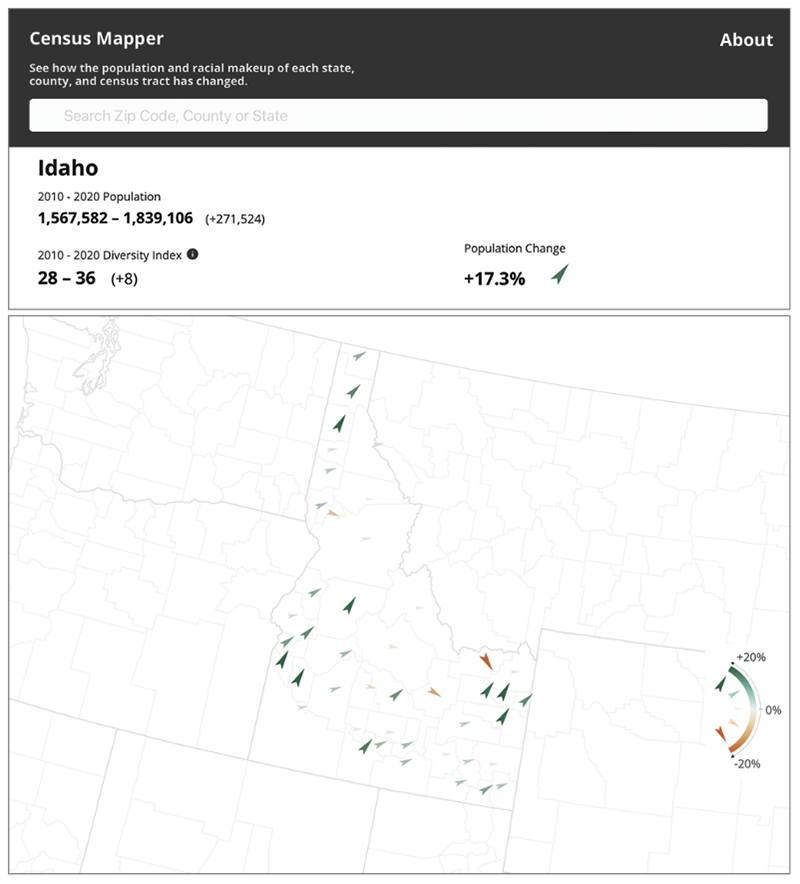 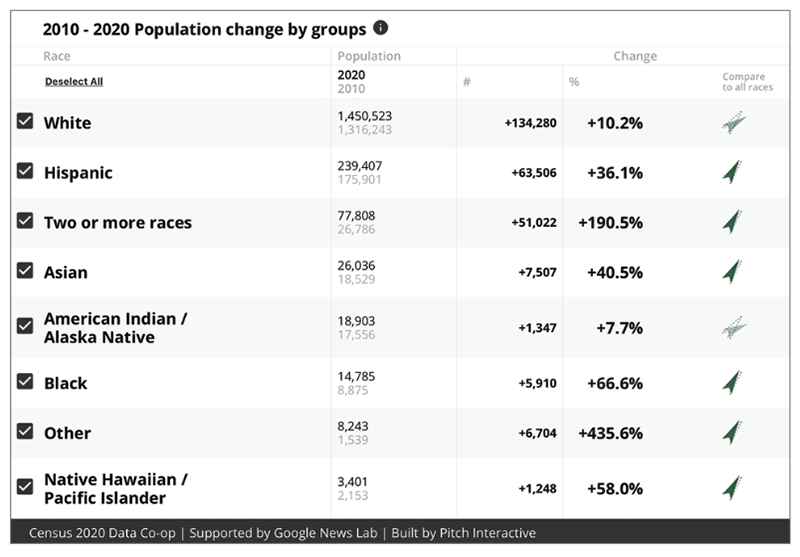 Idaho population trends from 2010 to 2020 by ethnicity ©boisedev/Census

We have already discussed which state has the most Black population in Cover Story 1 “Beauty Supply Survival Guide in response to Black lifestyle changes.” A notable fact is that Black population increased in Scranton-Wilkes-Barre, Pennsylvania from 2020 to 2021 by 43,241 (7.1%), and in Idaho by 5.7%. Scranton, Pennsylvania is the sixth largest city in the state and has flourished in the past due to the railroad industry, but currently its core industry is manufacturing. Idaho had been one of the least ethnically diverse states, but since 2010, the population has gradually grown in diversity. From 2010 to 2020, Black population grew by 66.6% over the ten-year period.

Every year, February is celebrated as Black History Month. Historian Carter Woodson has first designated the second week of February as Black History Month to celebrate the Black Americans’ contribution and achievement. In 1976, during the presidency of Gerald Ford, it was first recognized officially. Even after the emancipation, African Americans suffered segregation. It was only after the Civil Rights movement when African Americans could make achievements in various fields, especially in sports, and they have worked continuously to make a firmer ground.

Despite these efforts, racial discrimination and stereotypes persisted in American society. In February, African Americans want Americans to look closely at their civil rights and social justice. Many retail chains like Target, Abercrombie and Fitch, and so on run various events and campaigns including charities, collaboration with Black artists, promoting Black-owned business, and so on in February. 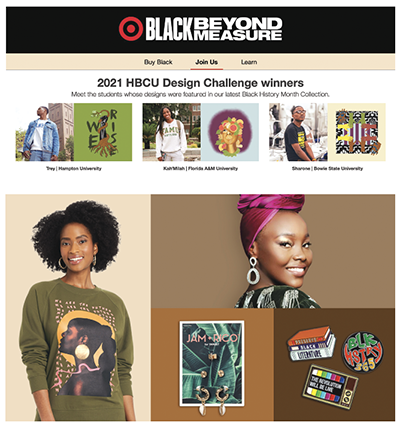 Target releases various products ranging from accessories to office supplies, beauty products, and books in the Black History Month. Through the HBCU design challenge, they pick a designer who will be given an opportunity to collaborate with Target. 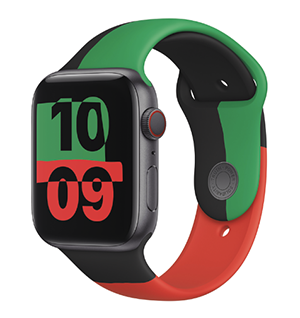 Apple celebrated the Black history and culture with the Black Unity collection. Its design was a collaboration of members and allies of Black creative community at Apple incorporating their belief in justice and racial equality. Inspired by the historical and contemporary social movement calling for unity and action, the Black Unity sports band has “Truth, Power, Solidarity” engraved with a laser on the inner surface of its stainless steel lock button. It also incorporates the pan-African flag colors. This flag contains the colors red symbolizing the blood during their fight for liberation, black symbolizing the positive recognition of their existence, and green symbolizing the abundance of natural resources in Africa.

Juneteenth became a national holiday in 2021 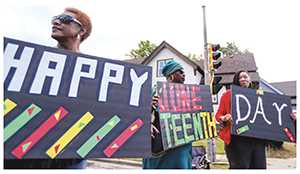 Last year, Juneteenth (a compound word of June and the nineteenth) became a new federal holiday following Martin Luther King Day (the third Monday in January) which was made 35 years ago in 1986.It celebrates the day when President Abraham Lincoln declared emancipation in Texas on June 19, 1865. Before the official designation, it has been dubbed Emancipation Day, Freedom Day, Black Independence Day, and so on, and various celebrations and events were held. After George Floyd was killed by police officers, nationwide protests racial discrimination occurred, and the Biden administration made the Juneteenth a national holiday. 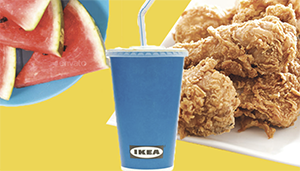 The day is supposed to be a celebration of freedom and racial equality and an opportunity to appreciate them, but some companies ran promotional campaigns targeting Black consumers with lack of sensitivity.For example, Ikea added to its cafeteria menu watermelon and fried chicken which encountered criticism regarding racial discrimination. Watermelon was a fruit of choice for slave owners to replenish their labor with water in a hot day, and not to mention the inferior quality of rationed watermelon, Black Americans were often mocked and humiliated while selling watermelon, resulting in a bitter memory. Chicken is also known to be a food item widely consumed by Black slaves. The combination of chicken and watermelon for special menu items could have been insensitive for those reasons.

Like watermelon and fried chicken, there are taboos when you interact with African Americans.

The world-famous Korean pop band BTS has changed a wording in its lyric, which originally sounded like the N-word, into a phrase with similar meaning to prevent possible misunderstanding. Two White students at Oklahoma University encouraged the members in a bus to use the N-word and got expelled from the university. 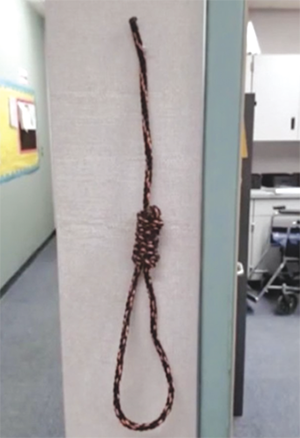 Noose or any symbol depicting noose must also be avoided. This year, a noose was found near a Stanford dormitory building, causing a controversy. Just two years ago, a dead body and a noose was found in California, which has been investigated for hate crime by the FBI. In the late 19th century and early 20th century, many African Americans were killed by hanging with a noose without a legal proceeding. Last year, a noose was found in the construction site of an Amazon warehouse, which led to a full-scale lock-down of the site. In 2020, a noose was found in a garage of Nascar’s only Black driver Bubba Wallace, to which he responded with anger characterizing the item as unforgivable racial discrimination.

Two years ago, in a Volkswagen TV commercial depicted a White individual blocking a Black male from entering a vehicle, which was criticized for mockery against Black people. Volkswagen first denied any intent for racial discrimination, but it officially apologized to the angered public and acknowledged “it could make people angry.”

Are all Black Americans Democrat?

After African Americans were given voting rights, until the 1920s, they were inclined to support Republican candidates. The Republican Party was at the time a strong advocate of emancipation. In fact, Martin Luther King Jr. was a Republican. Up until the mid-1960s, Democratic Party represented the Southern Whites and the Republican Party Northerners and Black Americans. The tide shifted since Barry Goldwater. Many African Americans are conservatives. Colin Powell and Kanye West are two famous examples.

Out of context adoption leads to cultural appropriation 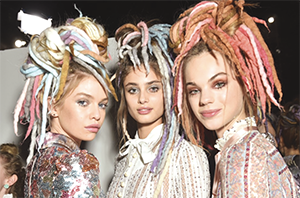 When one from a cultural group adopts tradition or heritage of another group, it could end up cultural misappropriation. It is a push-back against one’s use of cultural heritage lacking understanding of the context or proper acknowledgment or discussion about the cultural identity. Justin Bieber and Adele were criticized for wearing dreads, and designer Marc Jacobs had his White models wear dreadlocks in 2017 and had to apologize for causing controversy.

Dreads come from White slavers calling Black slaves’ hair dreadful after their months long voyage in slave ships. In the 1960s, the Civil Rights movement made the hairstyle popular, and in the 1970s, it became a hairstyle representing reggae music. This hairstyle symbolizes the emancipation of African Americans, and they feel disrespected when a celebrity ignorant about the origin and symbolism around it wears it.

Rather than saying “what’s the problem when you do it because it’s pretty?”, you should pay attention to the special meaning to it and their identity. Thus, when you need to appropriate another culture, you need to be careful. You should first consider if it might remind someone else of hurtful history before you try a new style.

If you have lived in the U.S. and run a beauty supply for a while, you must have had opportunities to talk and learn about Black culture from the employees and customers. However, you should always keep in mind that your stereotype based on certain unpleasant experiences can hurt an innocent person’s feeling without you realizing. Instead of providing blinded flattery to your customers and their culture, you should have a firm understanding of their cultural identity and history.