Since the pandemic, China has implemented a strict quarantine policy domestically as well as internationally, in accordance with the local guidelines in addition to Beijing’s official Covid-19 control policy. Also, the State Council of the People’s Republic of China website announces high and moderate risk regions according to the number of confirmed cases during a certain period and restricts transportation into and out of the regions. The case numbers are highly volatile, so it would be very hard to respond appropriately to ever-changing rules. It is getting almost impossible for beauty supply companies to send their employees to China for a visual inspection before placing orders. 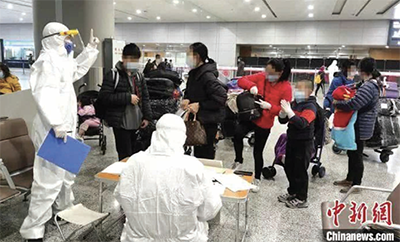 An airport in China ©chinanews.com

A friend of mine, Yuan, who worked in Russia for a China company traveled to Beijing on a Moscow-Shanghai flight. Although there were direct flights to Beijing, the Covid-19 reduced the number of flights making it hard to book a direct flight. At the moment, Russia to China flights were only offered by Aeroflot of Russia to Shanghai and by Air China to Beijing, each once a week.

After arriving at Shanghai, Yuan was placed on quarantine for 14 days at a government hotel in Shanghai. For 14-day stay at the hotel, Yuan spent 6,500 RMB, which is about $1,026, including meals. This is referred to as centralized quarantine in China. Yuan was subject to Covid-19 PCR test upon arrival, and for the next 2 weeks, three more tests were performed. For the following 7 days, Yuan was in self-isolation in a hotel. For all travel, Yuan used a government vehicle for transportation. At the same time, every morning and night, vital signs were monitored and on the Day 2 and 7, yuan got a PCR test. Unless you have a residence in Shanghai, you must quarantine in a hotel. Yuan could go to Beijing after 21 days of quarantine.

However, even after the 21 days of quarantine, if you had come from a region that is designated as a high or moderate risk region, you would be submitted to another isolation in Beijing. If that is the case, you would end up quarantined for the total of a month when traveling to Beijing.

Beijing is currently placing a strict ban on a domestic traveler who is from a region that has at least one confirmed case within 14 days to date. All passengers of flights, trains, and inter-province long-distance buses to Beijing must have a negative PCR test result issued within 48 hours in addition to a health QR code, also called Green Code. 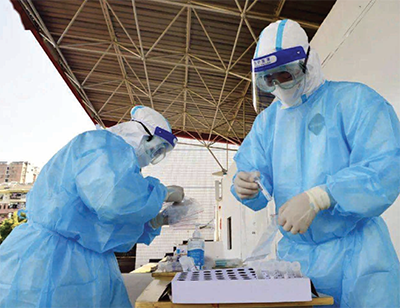 To visit Xuchang, Henan Province or Yiwu, Zhejiang Province that had been frequently visited by many in the beauty supply industry, you need to first go to Beijing or Shanghai and then travel on trains, buses, personal vehicles, and so on. However, on January 6, authorities of Xuchang issued a statement that “except for essential vehicles and personals, residents of the city should stay home and all travelers should return to their home.” In other words, but for people with purposes recognized by the authorities, such as healthcare and public services, no one should go in or out of the place. Zhejiang Province where Yiwu is located recommends 14 days of centralized quarantine for international travelers followed by 7 days of self-isolation and 7 days of self-monitoring during which you should refrain from unnecessary outing but visits to healthcare facilities for Covid-19 testing, and the same guideline applies to domestic travelers from the high-risk regions. Risk levels frequently change according to the reports of confirmed cases, so it is hard to specify regions that require special care.

Under these circumstances, many in the industry reported that they are not making plans to visit China. Along with foreigners, Chinese nationals studying abroad in the U.K., Canada, and the U.S. as well as working abroad are finding it difficult to enter China.

Making things worse, the U.S. and China got into a dispute over suspension of international flights. On January 11, China suspended flights to China operated by American Airlines and United Airlines in its effort to run a successful Beijing Winter Olympics in the midst of the pandemic. Among the suspended flights were Dallas to Shanghai flight arriving on Friday by American Airlines and San Francisco to Shanghai flight arriving on Sunday by United Airlines.

Chinese officials explained that it was inevitable because of the large number of Covid-19 positive passengers in these flights. It totaled 44 flights including 20 operated by United Airlines, 10 by American Airlines, and 14 by Delta. In an immediate response, the U.S. Department of Transportation suspended 44 flights from the U.S. to China operated by four airlines including Air China, China Eastern, China Southern, and XiamenAir. XiamenAir flight from Los Angeles to Xiamen, Fujian Province was canceled from January 30 departure through March 29. As a result, the U.S. also canceled Chinese airlines flight from the U.S. to China, making the available flights to travel from the U.S. to China very limited in number.

Due to the restrained supply, the cost of flight tickets to China is rising fast. As of January 24, the estimated cost of United Airline flight from New York to Shanghai flight was $6,989. For customers with limited resources, airlines are offering payment terms at $684 monthly installments, but few people would willingly buy a ticket that used to cost less than $2,000 at a price nearing $7,000.

A screenshot from United Airlines website advertising New York to Shanghai flight at $6,989.

From the early days of Covid-19 pandemic, the U.S. and China had conflicts over flights. Last August, Beijing restricted some of the United Airlines flights, and in response, the U.S. limited the operation of Chinese flights at 40% passenger capacity for four weeks. The Civil Aviation Administration of China firmly stated that “reducing number of flights is not just for the U.S. but for all airlines traveling into China,” but the U.S. government has criticized that “suspending U.S. flights for Covid-19 confirmed cases is unreasonable.” As to the U.S. responses, China urged the U.S. government to “refrain from interfering with operation of Chinese airlines.”

In response to U.S. ban on imports from Xinjiang and diplomatic boycott of Beijing Winter Olympics, China is running boycott campaign against U.S. companies while raising voices. As the tension intensifies with the suspension of flights, the two countries are not showing willingness to compromise.

Use the above QR codes on your mobile device per your choice of apps (WeChat, Baidu, and Alipay)