Xuchang in central Henan province has firmly established itself as a wig city. Although hundreds of wig manufacturers spread across the Anhui and Shandong provinces among many, Rebecca Hair Products secured the wig city fame for the Xuchang. As you go back to the early days of wig manufacturing in China, most Chinese wig manufactures merely supplied hair pieces to overseas facilities due to the lack of technology. Rebecca Hair Products changed that to producing high quality wigs and eventually marketing in the Europe and America successfully, resulting in a cluster of Chinese wig manufacturers in the City of Xuchang.

Despite the long established fame of Xuchang, Shandong’s advancement over the past years was extraordinary. The history of wig industry in the region actually goes back 40 years. Its geographical proximity to Korea and Japan allowed the region to be the first place to catch the fashion trend. Most manufacturers in the region started as OEM makers fulfilling orders from South Korea.

Especially, Ligezhuangzhen at Jiaozhou City, Qingdao, Shandong is a cluster of approximately 300 processors and manufacturers of wigs, producing 2.8 billion yuan worth of hair products and employing 12,000 people as of 2020. They source the pristine human hair, not exposed to perms or hair colors, from undeveloped, mountainous regions of Yunnan, Guizhou, Sichuan and so on and process them to premium wigs that are sold in the global market. It is reported that Ligezhuanghen accounted for 40% of the global premium wig market.

In recent years, Yanghu Town in Yangxin County, Binzhou, Shandong has focused on the growth of the local wig industry. They are employing the surplus of labor in the nearby countryside to form a new industrial base. Juancheng County of Heze, Shandong also has approximately 220 established wig businesses, and according to an official report in 2017, this region was producing more than 15 million wig products yearly. According to a statistics report, Juancheng’s wig industry accounts for 74.67% of the region’s industrial output. 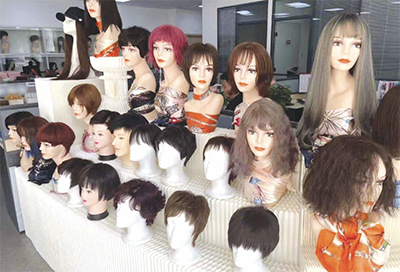 According to a news outlet in Qingdao, the City of Jiaozhou where Ligezhuanghen is located has a wig association with 56 member companies. They are gathering an enormous amount of mutual fund to invest in infrastructure, leading the e-commerce business, and 40% of the companies are focusing on maximizing profit by increasing overseas marketing. For their effort, the area was designated as the national e-commerce demonstration city in 2019.

In the midst of the remarkable collaboration, some of the companies stood out. One of them is Qingdao Seaforest Import & Export Co., Ltd. led by CEO Luzheng Sun who is widely known for his quality-focused mind. He even pays attention to the direction of each hair strand on a wig, which influenced the company’s hiring practice.

Founded in 2002, it started a company the following year in Lagos, Nigeria’s largest city, and sold 4 containers full of products within a month accounting for $800,000 in revenue. In 2004, it received a $130,000 order through a Japanese subsidy. Across Europe to America, it is growing steadily everywhere, and its Seaforest brand has become one of the Hollywood stars’ favorite brands thanks to its promotion and marketing efforts in LA and NYC. With an interview with Phoenix New Media, CEO Luzheng Sun disclosed his plan to “continue the effort to seize both the domestic and international market by establishing sales agencies in Shanghai, Hangzhou, and Shenzhen and a marketing center in Beijing.” 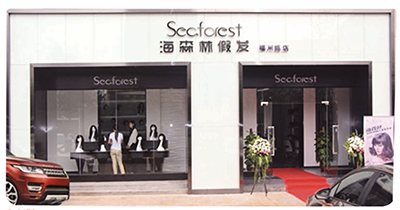 A retail storefront of Seaforest @8158.com

Qingdao Yuexiu Hair Products Company is targeting primarily the Black hair markets in North America and Europe. It invested an immense amount of money in e-commerce including Google advertisement, and the aggressive marketing has won a list of celebrities as customers.

On a day in 2004, CEO Ye Mingjing received a phone call from the U.S.  It was from a hair stylist of Beyoncé. In response, they developed a special wig for Beyoncé, which was not a success. The wig arrived at the U.S. deformed during the shipment, and Beyoncé was not happy with it. They tried for the second time with a product made of more elastic material and received a green light from Beyoncé finally. As Beyoncé was known to be hard to satisfy as to wigs, the company consequently earned a fame in the U.S. and European markets and received many inquiries about customized wigs. In 2012, CEO Ye Mingjing heard that Michelle Obama was interested in wigs, and he courted her online through his sales associate. Not long after, he received a request for wigs. Two sample wigs soon arrived at the U.S., which were followed by an actual purchase order. The advertising effect of it was incredible.

The Shandong wig industry continues to move forward under the slogan of “domestic and international double circulation”. The future is bright for them because of the potential growth of the wig market as evidenced by an unofficial count of 200 millions of people suffering hair loss in China. The collaborated effort of companies, global fame of a handful number of brands, solid labor force, and so on are anticipated to be a solid foundation for the continued development of the wig industry in Shandong province.