“Shall We Go into Partnership?”

“Shall We Go into Partnership?”

President Oh Dong-ho founded the first beauty supply store in ’93. Currently, there are 4 stores in Memphis, Tennessee and 1 in San Antonio, Texas, a total of 5 large beauty supply stores up and running. He has entrusted most of the store operation to his managers since ’96 January, the beginning of his business.  At the end of winter with spring around the corner, BNB met president Oh, a successful but humble-looking man, and heard about his job and life stories.

“The manager knows the beauty supply better than I do…”

“I don’t have the key to the store door at all. I don’t even know the Security number for the door. If the manager doesn’t open it for me, I can’t even get inside the store.”
He had recently moved to Atlanta, Georgia, from Memphis, where he had a business running.
Mr. Oh has never been involved in store operations for 25 years, starting in January 1996, when he opened his second store and had only been half an year since he started business. In 1993, he invested all $ 30,000 of his money and some borrowed money, and opened a $ 100,000 beauty supply store. In mid – ’95, he opened his second store.

In recent years, as the number of beauty supplies that operate multiple stores in a corporate style is increasing, the manager system is becoming more common. But, twenty-five years ago, there were very few people who did that.

What was his reason for using the manager system from the very beginning?

“At that time, in 1996, my beauty supply career was only about two years old. But the manager was a 10-year-experienced beauty supplier. When I went to the store, all I said was, “you’re doing great,” and nothing else. Rather, me being there was more troublesome than helpful. So I left it all to the manager.” 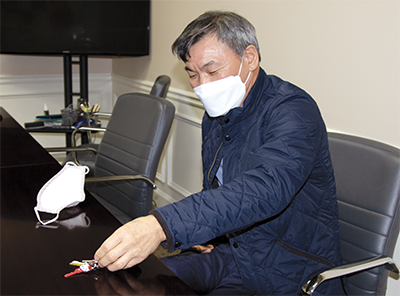 During the interview, Chairman Oh pulls out a small package of keys, saying he doesn’t have the store keys

“10 managers learned work and became independent businessmen.”
“One time, a manager with a lot of experience came, and he didn’t even know which company the product was. The owner of his past store didn’t teach anything about ordering things because he was afraid the manager would learn too much and start an independent business. There are still managers like this who doesn’t know anything.”
“However, I gave the keys to that manager a few days later. He was surprised. He said that the boss or his wife had closed the doors in person at the shop he had worked before.”
In his shop, President Oh says he encourages managers to learn and become independent. So far, about 10 managers have set up businesses and become independent. This is what he always tells his managers.
“All the know-hows you learn here is yours. Learn well and get out there!”
Sometimes there are people who ask President Oh for advice on management.
“No matter who, if someone asks me about how I manage my store, I tell them honestly and sincerely.”

“If you remain the same after 10 years, don’t do business.”
To the managers who made their own business, president Oh makes sure to tell them this.
“There’s no need to do business if you remain the same after 10 years. And don’t go telling people you learned from me. It may depend on your abilities, but something needs to be changed a little bit to suit the store to your abilities. For example, if you say it takes 20 years to completely change something, you should continue to change by 5% a year.”
Then he added a word.
“Yeah, there’s a lot of the shops that haven’t changed in 10 or 20 years.”
“Of course, it doesn’t mean that it’s wrong to do business without change. If they’re happy and content with it, that’s the right answer for them. To each, their own.”

“Happiness is not decided by how much things you have.”
President Oh suddenly unfolds his theory of happiness.
“The time when I was the richest man was in 1988, when I was thirty. I came to the United States with 200 U.S. dollars, and I made 5,000 U.S. dollars in a year.”
President Oh then said that he worked 12 hours a day for six days a week.
“I worked  a year and I got 5,000 dollars. It’s not because I earned a lot of money. But I didn’t have time to spend money even if I was earning less. The monthly room rent fee was 80 dollars and I spent 200 dollars for food.  That’s how I lived for a year, and I’ve saved 5,000 dollars. I felt really rich. How rich would you feel if you thought you could live two years without doing anything?”
He says he has never been happier and richer than he was then.
“Wealth and poverty are not determined by more or less of things, but of the mind. I may be richer materially now, but I don’t feel richer and happier than I did then.”

“My way of management is not always the right answer.”
A beauty supply president heard about Oh and said that he wanted to run a store like him, and President Oh willingly gave him consulting. But a week later, the person called and said he couldn’t do it and gave up.
“My way of management is to clear the mind, put down greed, and take risks and penalties. What is more, you have to work day and night untill your seed money is ready.”
“Another person said that his business was running well, but it doesn’t make profit. When I went to the store, I found its warehouse full of stuff. When he had money, he ordered a lot of products and piled them up in the warehouse. He did it to hog all the customers and to not lose them.  You need to have a management system that fits yourself. You can’t have it all.”

“Don’t try to make the perfect shop.”
When a manager who set up a beauty supply independently said, “I will never sell this store,” Chairman Oh said this.
“Don’t you want to develop your business? You’re going to take this store to the grave? No, you shouldn’t. Are you going to live off the grid, like the men on TV? If you want that, do as you please. But if you want to develop, you have to use this store as a stepping stone. You have to sell it at the appropriate time, move it to a new place, or at least make it bigger.”
“And when you’re selling this shop, don’t make it perfect and try to sell it expensive. You have to leave room for the next owner to develop this place. And that way, there will be people willing to buy this store because the price isn’t too high.”

“I don’t fire the incapable.”
“I tell the managers, ‘don’t abandon people who work hard but don’t have enough skills. Just hire more people.”
However, I also tell them, ‘If someone has competence and ability but doesn’t work hard, tell them to look for a job elsewhere. tell them that there will be other positions that will allow them to display their abilities and suit them.’

What should one do if this business was to last until the next generation?
“I think it’s a bit utopian … but I think you would have to share stakes.  If it’s a $ 1 million business, 10 people each invest $ 100,000, a 10% stake. And wouldn’t you be able to do a big business if you go with the joint management method?”
“Just as I said before, like we grow small stores, as we grow joint-owned businesses, we’ll get a big dividend later on depending on our shares.”
“I think we should make the second generation meet each other often. Later, they will invest their own stakes and make a big company to buy a business and a big building… This is how we should grow our business further in the next generation. I already tried a few attempts and failed, but still even now I think it’s the path we need to go.”