Its first Miami show; an overview of recent trends

For three days from August 27 to August 29, 2022, the biggest Black beauty show, Bronner Bros show folded out at Miami Beach Convention Center in Florida. After two years of hiatus since the pandemic, it was the first in-person show. And a large crowd welcomed its comeback. According to the organizers, more than 300 vendors took part in the show that featured various workshops, seminars, and competitions.

The event hall was largely divided into booths for participating vendors and beauticians, event stages, resting area, and a food court. From the entrance, the beauticians and representatives from many companies promoted their products and services with vibrant music and heightened energy. Weaving was at the center of the event. After a long period of the dominance of braids, weaving showed off its wing at Bronner Bros. A weaving competition was hosted, and 18 out of 100 classes during the event period were about weaving. Although hair colors covered in 30 classes and natural hair care in 26 classes surpassed weaving in number, it was still the single most popular topic for styling technique. You could easily spot weaving demonstrations and products in the vendor booths.

In addition, you could say “natural care”, “sunscreen products for Black skin”, and “renewed variety of men’s products” were keywords for this show. Let’s dive into Bronner Bros show that heated up the event hall for three days.

Most booths showed off highly customized display that revealed brand or personal identity of the participating company or beautician. Mesmerizing interiors that resemble nightclubs, high towers of wig display that nearly touched the ceiling, glowing mannequins that simulate skin tones, and turntables you could normally find at a Chinese restaurant are only a few examples of the things that caught visitors’ eyes. 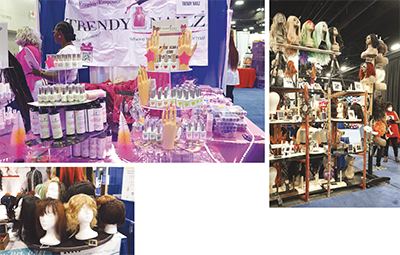 In addition to the unique concept, each and every booth planned activities offering new experiences for visitors. You could get hands-on styling experience or enjoy a variety of party foods, and many selfie zones and dance halls entertained the visitors. KISS equipped its booth with a large screen display and hosted various events in cheerful mood. 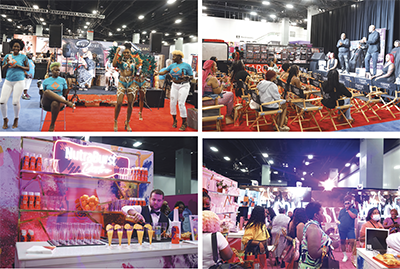 Representatives from each booth were busy making personal connection with people by commenting on their looks, shoes, and hairstyles, and instead of just giving away free samples, they often asked to follow their social media handles in return. The hall was a place of communication for vendors promoting and educating clients about their product and service. Some of the representatives wore shirts printed with QR codes that links to the company’s website, and a few live streamed their booth to invite more people to their booth. 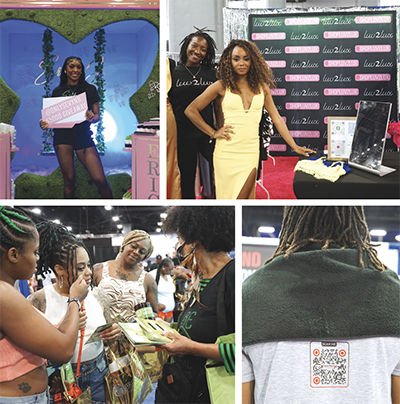 The highlights of a beauty show are always “show deals” that are available only at the event and the highly anticipated new product release. Elabore introduced hush color creams that follow protein sprays or boosting creams to protect and prepare the hair for coloring as a flagship product, and KISS introduced titanium clippers, edge lining T-shapers, and pencil flat irons. H2PRO actively promoted hot combs for hair styling and a healing therapy system geared to Black hair care, including show-exclusive deals. Beauticians decorated booths like salons. They hung their pictures and heavily promoted their social media presence while welcoming customers themselves. 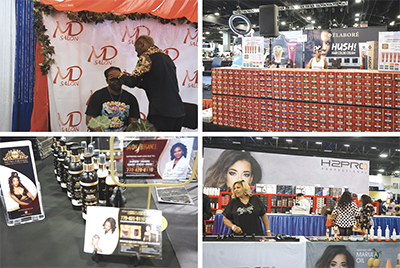 “Male grooming” and “natural care” were hot potatoes of this year. Including beard and hair grooming products, accessories, clothing, and other items targeting the male consumers can be seen everywhere. You could easily spot promotional phrases like 100% organic and natural ingredients. The company that brought awareness to the need of wearing sunscreen to the Black consumers, Black Sunscreen, also participated in the show. For male products, beard trimming, and care products and hair growth oils were the main entries. A male fashion clothing brand featured their CEO outfitting their clothes and made great impression to many. A traditional type toupee with all-around track hair showcased the evolving nature of male weave hair. 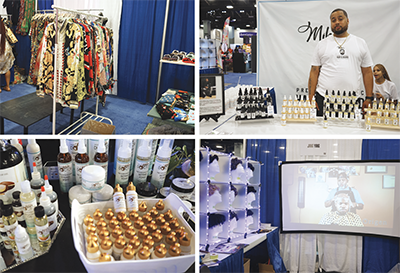 A great thing about a beauty show is that you can view various trends at a place. This year, bling bling accessories and bold patterned clothing were still popular. Tight clothing with stretchy materials that show off the body curves, season-inspired lace and see-through materials were also popular. 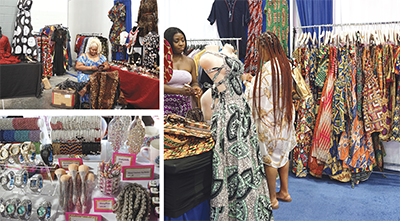 Eight companies could be verified as being Chinese-owned, and most of them were hair product companies. One of them, Long Ying, claimed that they have a manufacturing facility in New York. The company put emphasis on 100% human hair and offered show deals for various kinds of products, among other aggressive marketing campaign. A company from Qingdao brought 3D mink lashes and 3D synthetic lashes. Also, we could find booths for Ted Hair, Laiya Hair, and Jingying based in Xuchang, Henan Province as well as Moana Hair based in Atlanta. Moana Hair brought sewing machines to demonstrate how a wig is made, and it promoted their custom wigs that are available with $75 minimum order. 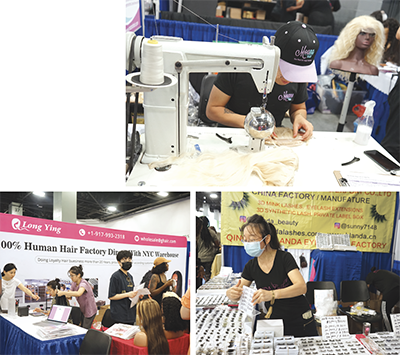