Making of a Velcro Wig—Long Pursuit and Sweet Success

Making of a Velcro Wig—Long Pursuit and Sweet Success

On August 17, 2021, the U.S. Patent and Trademark Office (or USPTO) issued a patent to a beauty supply business owner in Orlando, Florida. It was for a wig hair cap brought about by years of research and development. The inventor’s name read Jaesung Sim who devoted countless hours of his time to develop a Velcro wig since 2016. While running a number of successful beauty supply stores in the area, he moonlighted to develop a hair wig incorporating his years of knowhow and industry-specific knowledge, and the payday had finally come.

Mr. Sim commenced his inventive endeavor in 2016. It started from a mere idea that Velcro tapes can be a great means to use with hair extensions. Velcro is widely used for its convenience and easy attachment, but not many wigs utilize them as much. He thought it was a blue ocean, and it felt like a great opportunity. As a beauty supply business owner, he understood the hardship of African Americans who wear wigs daily better than anyone. Hence, he also thought of contributing to the African American community with his ingenuity.

As everyone knows, Velcro consists of two very different sides. The soft and flexible side has many loops, and the rigid and rough side has many hooks. The attachment happens when the hooks cling to the loops. For obvious reasons, a loop side was better candidate for a hair cap: you don’t want a rigid thing over your head. So, he added the hook side on the hair wefts. 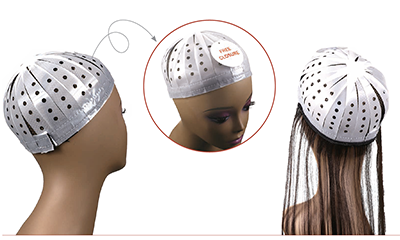 As a hair weft clings to multiple wedges, the wedges form a part hair cap that fits a head shape perfectly.

Unfortunately, there was a big drawback. The hooks on the hair wefts easily became tangled with hair, so you could not wash and reuse the hair extensions. The hooks had to be on the hair wefts because the rigid side was not going to make a comfortable hair cap. For the next two years, he researched if Velcro can be thinner or softer and checked if there could be answers in the wig manufacturing process.

During this time, his application for a patent was rejected by the USPTO. He learned only after the rejection that there were actually quite a number of attempts to incorporate Velcro in wigs. Because Velcro is neither elastic nor thin, making unfit for a hair cap, there were many attempts to solve this problem. A patent revealed that a multiple number of Velcro thin tracks can be utilized on hair caps. There were many other patents incorporating different ideas, but apparently, nobody was successful. If anyone were, he would know.

From a user’s perspective, it would make a wig that does not lay flat. No amount of advantage such as easy care and application would make up for that. As he knew what exactly wigs are supposed to be, the problem at hand was obvious. From there, he undertook a 4-month long research and created a totally new hair cap for wigs, whose novelty and significance were recognized by the USPTO on August 17, 2021, by an issuance of a patent.

This new hair cap consists of an elastic headband and multiple wedges that stick out of the band, like a crown. The wedges are attached to the headband, but not affixed to each other. When hair wefts are applied from left to right and bottom up, the wedges form a network among wedges and a hair weft. As the network intertwines with other networks via another weft, the hair cap is formed in a shape that perfectly matches a wearer.

After wefts are applied from bottom to top, a crown can be covered with a round closure. After application, the wefts are tightly affixed to the hair cap.

Who would’ve though of a hair cap that looks more like a crown? The network of freely moving parts forming a cap is something that never seen in modern headwear. Without Mr. Sim’s persistence to solve a problem he faced, he would not have come up with this novel idea.

As being a very alien way of making a wig, it would take a lot of marketing and education efforts to begin with. Even then, it is not compatible with any existing products, so significant investment in infrastructure should follow. Nonetheless, Mr. Sim’s great achievement after challenging himself out of his comfort zone should be enough to inspire many potential inventors of beauty supply products across the country.