The birthplace of blues, a musical genre that can be traced back to Black slaves’ work songs, Memphis, Tennessee was at the center of the Civil Rights Movement in 1960s and is known for a place where Dr. Martin Luther King was assassinated. Also known as the city of soul, the demographic of Memphis is 63% African American according to the Wikipedia. Although it has little Korean population and is probably not a land of milk and honey, still many Korean immigrants are living here rooted in the community. One of them is store owner Jaebong Choi, who came to Memphis as an international student, and he made his dream come true when he opened his own store in 7 years from when he started working at a beauty supply part time.

We met him at one of two beauty supply retail stores he ran in Memphis and talked about many topics. Since 2007, he worked in the industry for 15 years, and we were about to learn about the story. He still had the youthful charm of a young man and talked candidly and gave us many great answers to every question we had. Sometimes he could strike as quirky, but his seriousness behind his humor could disarm anyone in front of him. He started his story with a self-characterization of “being a difficult one” and talked in detail about his business. 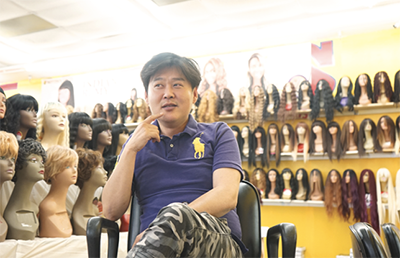 The beginning of Pro Beauty

Mr. Choi came to the U.S. after finishing his school and discharged from military service following his parents and sister who came earlier. It was only 2007. He studied business administration in the University of Memphis, and at the same time he started working at a large beauty supply retail store in Memphis part time. As he learned about the business, he concluded that the beauty supply business has a great future ahead. “The owner of the first beauty supply that I worked is a great man who treated me like a family and still does. I learned a lot when I started working at the store with no experience.”

While working there, a wholesale company reached out to me for a job in San Francisco, and he became a sales associate for accessories anchored in the new city. “I once made the top sales associate in North California”, said Mr. Choi with a boastful smile. When asked “if there was any hardship”, he answered, “as long as you’re good at your job, life is easy. Only good came out of the job.” He expresses such a gratitude for the company where he had a great experience and enjoyed every bit of it.

In 2012, he left sales and came back to Memphis when his former employer asked for his help. Based on his experience in retail and wholesale back and forth, he opened his own store in 2014. “I think this way. I learned so many things from retail to import without spending my money. What I learned has became a great asset to run my business now. I am grateful for everyone who supported me and taught me.”

His realiable backup, his wife

There were several reasons why he named his retail store “Pro Beauty”. He actually took the name from a Pro Cleaner, a dry-cleaning business his friend ran, but when he started using the name, he gave the meaning of “professional.” Of course, it was a great choice because the name was very easy to remember. Since he opened his first shop in 2014, he found another retail space which was about 12,000 sqft, 150% bigger than the previous one with 8,000 sqft. He entered into a lease agreement in 2018 for his second store. It took a year for the inspection alone due to the pandemic. It started to run in full scale last May, and Mr. Choi is on top of it while the first store is wholly run by his wife. The interview took place at the first location, and we could not find a single dusty spot. When asked about a secret, he gave a thumbs up to his wife saying, “she’s so neat and organized by nature.”

Wig section was organized by size and style, and even the floor was utilized for display to compensate the smaller retail floor. Every nook and corner were thoughtfully organized and well-arranged as if the items are on a military parade. When asked for an interview, Mrs. Choi shook her head. “I didn’t do anything,” said Mrs. Choi who kept monitoring the retail floor. When his wife is so much on top of the store management, it is understandable that Mr. Choi could be highly focused on promotion and sales. He runs a membership program, for which the details are trade secret. He went as far as disclosing that nearly 5,000 members are enjoying various benefits. They can receive sales information as well.

To reduce theft, he chose to tightly mark every customer rather than beefing up the security. It is not simply following customers around but attending them closely so that you can provide product information and help them find what they are looking for. This makes customers to think the business is caring. When a customer is carrying around items, an associate would simply ask “do you need a basket?”. That’s how the theft is minimized at Pro Beauty. 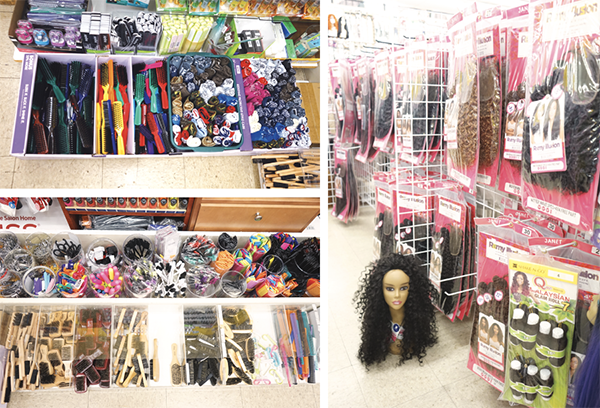 8,000 sqft is not a big space for a beauty supply. Nevertheless, Pro Beauty carries such a variety of goods thanks in part to the floor display. To prevent them from kicked around by shoppers, items are enclosed in a display cabinet or a box. Mannequins to provide fitting experience are taking a part of the floor display as well.

Pro Beauty makes sure the seasonal and trendy items and popular fashion items are up-to-date. Mannequins are deployed not just in the clothes section but also at the entrance and other places to catch shoppers’ eyes. Mr. Choi said, “My wife is especially paying attention to these” where she handpicks items based on the employees’ sales report and opinions. 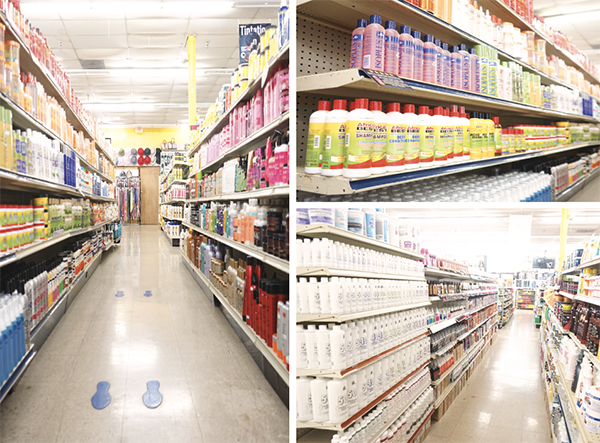 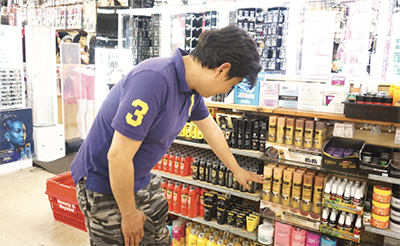 As if aligned using tape measures and compass, the chemical products are on display organized by usage, size, and color. It was why the smaller store did not seem too crowded despite so many merchandises. The employees made frequent rounds to clean up after a customer browse items.

More than half of the retail space is devoted to hair products at Pro Beauty, and they occupies the right half when seen from the entrance. In length and style, they are neatly organized, and hair mannequins occupy shelves to the very top. Before the pandemic, there used to be a small in-store salon.

While conducting the interview, a couple of employees came to Mr. Choi with questions. Every time, he gave a kind answer and smiled saying, “thank you, sweetie.” We asked “how’s your relationship with the employee?” “Store Manager Lisa was with us from the beginning. She took a day off for today, but she is really doing well as a drill sergeant. She can take care of most of the things including floor, human resource, and so on. She’s so thorough that I can trust her. Pro Beauty’s having happy hours regularly. Mrs. Choi who’s the top contributor for the flawless store never forgets employees’ birthday and family events. Every time a handwritten card is delivered to the employees, which drives them to work hard and stay loyal. Naturally, even the past few years with severe labor shortage, Pro Beauty didn’t have any problem. “Really, it’s all employees’ hard work that makes a retail business run.” It’s obvious that you should be good to someone whom you rely on. These people make possible that I make my living. It’s very important for me. 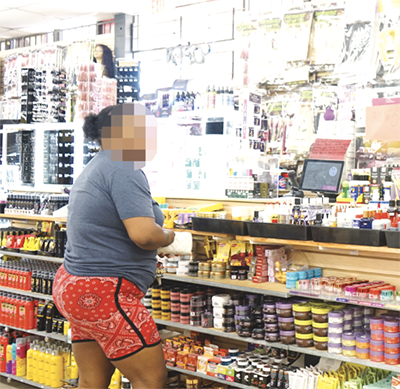 “I once gifted a pair of shoes to a small kid when I was working part-time in a ghetto. She remembered me and came back to shop later. I realized that a small thing I did could create a big memory for another.” Refreshing his memory of the girl, Mr. Choi says, “they know when you treat them with respect. Or I believe so.” When he sees a person coming in, grab merchandise, and storm out, he’s heartbroken like everyone. But he still tells them, “Don’t run! you’re going to hurt yourself.” He has a belief that his small kindness can go far and touch people’s heart. Is that why? When small and big Black Live Matters protests popped up nationwide after the death of George Floyd, the local community stayed awake all night to secure Mr. Choi’s store. The protesters from downtown broke into the store next door and smashed everything, but Mr. Choi’s store was unharmed. That’s when Mr. Choi thought that “well, it’s worth treating others with kindness.”

What are popular items in the Memphis area?

Although it’s hard to pinpoint an item or two, a large portion of Pro Beauty’s revenue is generated from braiding hair, clothes, and accessories. Mr. Choi says, “Black customers’ standard for beauty is changing” and reported that lighter colors and natural products are getting popular. To stay on top of the current trend, he spends time going to places with a large crowd to observe people’s styles. “Now, braiding hair is not just for summer but a year-around steady seller. It is also a new trend that light colored hair are popular while long hair’s popularity went down,” Mr. Choi revealed. Pro Beauty’s another selling point is a wide range of chemicals. Mr. Choi’s assessment on the competitive of chemical products is that although Family Dollar stores and Walgreens are competing in the market, still beauty supplies stay competitive in price. Some product groups have high loyalty. He often consults beauticians for their expertise.

Prospect for beauty supply? It’s not that rosy.

When it comes to the future of the beauty supply industry, Mr. Choi says, “there’s risk.” “Ever since I started working at a beauty supply, I heard people saying it’s a dying business. Nevertheless, Koreans kept the industry alive and well by making all the connections from importer to retailers within the Korean community. However, non-Koreans are entering the competition, and it could follow the footsteps of industry like grocery or gas station that was ran by many Koreans in the past. I hope more than anyone that the beauty industry keeps its stronghold. Hopefully, it passes down to the next generation and overcomes the challenges from big corporations with big money.

“It applies to everywhere, but especially in Memphis we are a small town. I wish we could get together more often. We are struggling in a foreign land to speak frankly. I wish we prioritize surviving together than just getting rich. Would it be difficult?”