No. 1 trading partner of China was the U.S. whose import of wigs and eyelashes increased by 160.9% over year.

President Joe Biden and his Chinese counterpart Xi Jinping had a virtual meeting on November 15, 2021 and discussed several sharply contentious issues. On the table, President Biden raised concerns for the unfair trade practice of China and expressed his willingness to sustain economic and trade pressure on China.

The so-called US-China Trade War started during the previous administration. Former President Donald Trump criticized China’s unfair trade practices and signed an executive order imposing high tariffs on Chinese goods in 2018. Chinese government responded immediately. Chinese government-run media poured out reports displaying hostility to the U.S. on a daily basis and actively voiced that U.S. actions were not acceptable. Since then, two countries had not found a middle ground, and the trade dispute is ongoing.

Nothing was new in the virtual meeting, and both parties exchanged warnings and statements with no practical impact. Meanwhile, China released the statistics of foreign trade for the year. According to KIAA’s research and analysis report, from January to September, export to the U.S. totaled nearly 450 billion dollars. Import from the U.S. was 131.5 billion dollars.

Especially, goods such as wigs and eyelashes accounted for over 1.3 billion dollars in the 9-month period of the year, which is a 160.9% increase over the last year. The total export for the goods was 1.9 billion dollars, so the proportion of U.S. trade was significant in these goods. It was followed by Nigeria, South Africa, the UK, and Ghana, and the highly ranked countries were all with high African-descent population. To countries like South Africa and Ghana, the export increased by more than 20% over the year. (See the chart.) 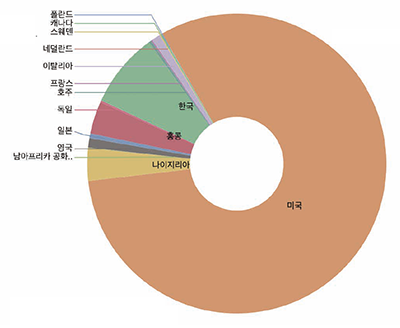 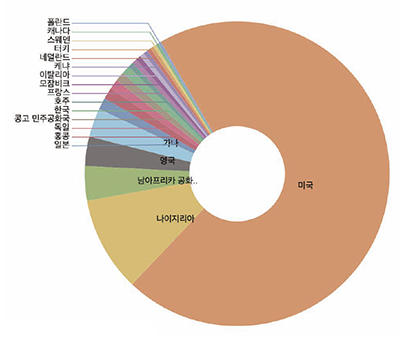 Complete wigs of synthetic textile materials 수출입현황 <한국무역협회>The U.S. was the top buyer of Chinese synthetic wigs as well. As of September 2021, relevant goods exported from China to the U.S. totaled 54.7 million dollars. It was 78.8% increase over the previous period. For synthetic hair, Chinese import from the U.S. has increased, for which the trade volume almost doubled, with the rate of change 97.9%. (See the chart.) For human hair, the top trading partner was also the U.S. followed by Hong Kong. As of September 2021, Chinese export of human hair to the U.S. totaled USD 527,040.

This October, a trade fair hosted in Yiwu, China, dubbed the world’s factory, was a great success. Around 70,000 visitors gathered while virtual conferences via online platforms took place at the venue due to Covid-19. 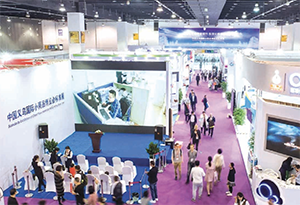 The event hall for the Yiwu fair

According to Yiwu’s tax authority, the city recorded 272.69 billion Chinese Yuan for the first three quarters of 2021, a 18% increase from the same period previous year, and Chile and Mexico recorded the most increase. For the third quarter, the City of Yiwu and African countries traded 55.7 billion Yuan, which is 15.2% increase from the same period last year. With Asian countries, the number stayed the same at 34.03 billion Chinese Yuan, and with European countries, it increased 27.4% at 28.58 billion Yuan.

In view of the statistics, Chinese foreign trade seemingly fared well despite the complex factors such as trade sanctions, sea container shipping rate spike, and the increased cost of raw materials. Additionally, the U.S. was the biggest trade partner. Despite the continued pressure from the U.S. government, China has not lost her confidence for a reason.