Beauty supplies are increasingly reaching out to Hispanic and White customers, but still the majority of the customers is Black consumers. For a long run in the beauty supply industry, businesses must have a deep understanding of how Black lifestyle and perspective is changing and must keep up with it. When  Black life changes, beauty supply must too. Based on demographic data and statistics regarding Black household income, property ownership, education, social media activities, and so on, we delve into ways for beauty supplies to survive.

Also shifting is the regional distribution of Black population. The following report about Black demographic trend of regional distribution over approximately twenty years shows that Black population grew across the country since 1990 with the most growth in the South. The Northeast and the Midwest had seen a decrease in the percentage of Black residents from 19% in 1990 to 17% in 2019. According to the most recent data in 2020, more than half of the Black population in America, namely 58%, lives in the South.

Household income for Black households rapidly increased from early 1990 to 2000. Global financial crisis through 2007-2009 caused the income to plummet by 38%, and the impact was felt until 2010, but around 2018 it was back to the previous high levels and is still on the rise. The median income for Black households in 2020 was $45,870 in 2020, which was slightly below the prior year’s due to the pandemic. 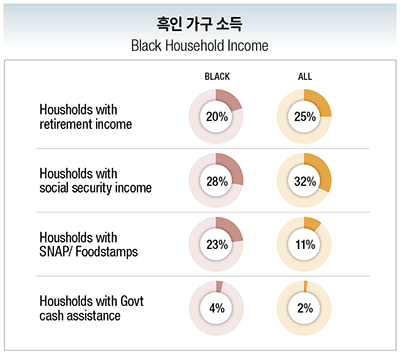 Black households are less likely to receive pension or social security benefits. On the other hand, more Black households are beneficiaries of the SNAP(food stamp) or other government aid programs. The Supplemental Nutrition Assistance Program(SNAP) helps low income households with money for food purchase, and the recipient must have income less than 130% of the federal poverty level or $2,379 a month as of 2022 for a family of three. Poverty rate among Black fell from 40% in the 1960s to 19% in 2020, but still it is considerably higher than other populations.

Home ownership can be a measure of financial stability and generational wealth accumulation, and it constitutes one of the most important asset for the working class and the middle class. A 2022 survey on Black American’s opinions and attitudes found that more Black Americans consider the home ownership’s importance  essential to their rise to the middle class than White Americans. 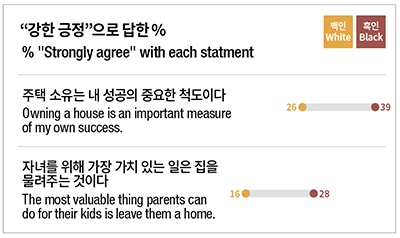 Nonetheless, the home ownership rate among Black households stayed more or less the same from 41.6% in 1970 to 43.4% in 2020, and it fell behind the White households’ 72.1%, deepening the already existing gap to nearly 30 percentage points. According to the National Association of Realtors, Black Americans are over twice more likely to withdraw from their 401(k) or IRAs to make down payments for house purchase compared to White Americans. 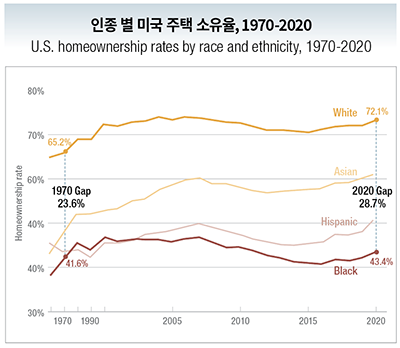 Unless you live in a big city with an adequate public transportation system, you will need a vehicle to live in America. Other than personal use, it is an essential prerequisite to access education and employment opportunities. Nonetheless, low income and non-White households fall short in vehicle ownership. The following graphs show the percentage of households without a vehicle by race/ethnicity in 2019 and 2020. 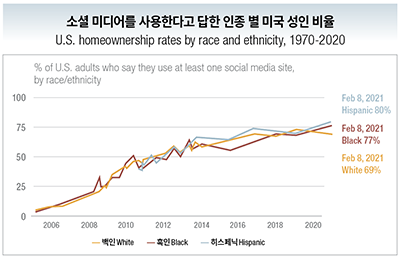 As shown, the number of social media users have increased gradually. By race, Hispanic and Black are leading by a small margin. However, you should more carefully look at the participation in activism on social media. According to a survey of American adults in June 2020 conducted by Pew Research Center, social and political activism on social media varies substantially among race/ethnic groups.

The extensive use of social media among Black Americans stands out. 48% of Black users of social media posted photos to support their cause, and 45% encouraged others on major issues. Black users were twice more likely than White users to say that they had used hashtags on social or political issues. As an example, following the death of George Floyd, #BlackLivesMatter was used 47,800,000 times during the period from May 26, 2020 to June 7, 2020 according to the Pew Research Center’s Twitter analysis.

2. How should beauty supplies respond?

While big chains like Ulta and Sally primarily target White and Hispanic consumers, beauty supplies have a thicker Black customer base and more than 70% of the businesses are run by Koreans. Although more than 90% of beauty supply customers were Black in the past, the percentage is declining. Hence, many beauty supplies aim to expand the customer base to Hispanic, White and Asian consumers. Also, they started to carry a wider range of products to target different ethnic groups. Nevertheless, this does not mean reducing or neglecting Black customers. 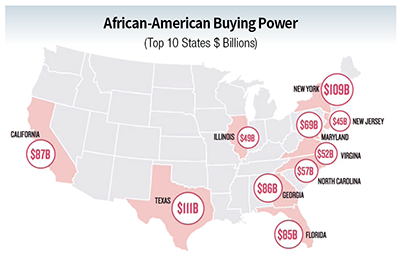 1) Black population and home ownership: Back to the Southern roots

Although the total population growth is meaningful, you should have a keen eye on the Black population in the area where your store is located. Home ownership can tell a lot about the financial status of your customers and also provide perspectives as to the future. It is easy to notice that most states with higher Black home ownership are in the South.

The sheer number of Black population in the South surpasses all other regions, the Northeast, the Midwest, and the West, combined. From 1910 to 1970, Black Americans who left the South to avoid financial hardship and racial discrimination to the North, the Midwest, and the West are flocking back to the South. Some say that it is the reversal of the Great Migration that happened 100 years ago. Many analyses agree that Black retirees and young professionals are making a comeback for the comfort of Southern living, moderate climate, and spiritual bond due to many relatives residing in the South.

If your area is considered a stable Black community with a large Black population and home ownership, you can plan for business expansion in the long run. On the other hand, if you see a low Black home ownership and stagnant or declining population, you should find ways to do business without stretching it unnecessarily.

2) Black household income: change is slow but there is hope

Beauty supplies are by nature sensitive to Black household income level. The increase in income level of the primary customer base would mean the increase in revenue for beauty supply products. Black household income is continuously rising and accompanying higher buying power although it might not be as much as others’. Another notable point is the growing number of upper and wealthy class Black Americans. 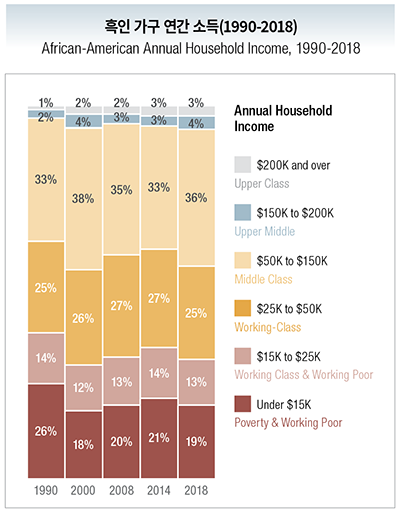 Black population with over $200,000 yearly income has increased by 138% from 2005 to 2013. The number of upper class Black Americans in “Black Mecca” cities like Atlanta, New York (Harlem), Houston, Los Angeles, and Chicago have doubled over the past 25 years. In contrast, the poverty rate has not changed significantly. In 2020, Black poverty rate was 19.5%, about twice more than White poverty rate of 8.2%.

As such, you need to find out the income level of Black consumers in your area and figure out when they would receive their paycheck. If the demographic consists of more professionals and middle class, you should carry higher end items such as human hair and salon-grade chemicals. If you find more people in poverty, you should have affordable items and have your inventory and staffing flexible to respond to the timing of payments of government aid.

3) Vehicle ownership: the neighborhood store is no more.

Many considered that Black consumers prefer smaller neighborhood stores opposed to larger retailers in the past, which might be partly due to the low vehicle ownership.

However, eight out of ten Black Americans own a vehicle now. Many Black consumers are driving distance to visit newly-opened stores, specialty stores, and so on. Some post their own retail store expedition stories on social media. If the retail store is cozy and delightful enough, they often make the store a place for fun or meeting friends.

The time when “neighborhood stores” had the advantage of proximity has ended. You should expand your marketing strategy to make your store “the store I want to go” instead of “the store closest to my place.” Stocking trend-setting products and savvy price marketing can attract customers from a long distance, and you might need to compete with a beauty supply chain located far away.

4) Education: Pay attention to the search for Black identity

How does higher education of Black consumers affect your business? Higher employment rate and rising income level may be the most visible impact, but the establishment of Black identity through education must also be taken into account.

Beyoncé became the first Black female headliner for Coachella in 2018, and she showed “what is Black culture” to the audience with a performance accompanying 200 Black college student dancers, instrument players, and choruses. In a documentary Homecoming, which filmed the preparation and behind stories of the performance, she emphasized the meaning of education in Black culture. “Do not deny the past but live the present, but do not forget that you can make a better country with your own hands. For me, Black people are the most beautiful things,” said Beyoncé. 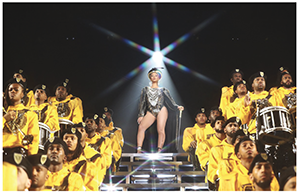 Beyoncé’s Coachella performance was closely followed in documentary Homecoming: A film by Beyoncé (2019)

The population growth, educational advancement, and civil rights movement are emboldening calls for Black identity. The Natural Hair Movement is receiving attention and enthusiasm for the same reason. Finding a Black’s own beauty instead of hiding natural hair with wigs or extensions is the backbone of the movement. Hair care brand Pantene has launched Pantene Gold Series to meet the needs of Black female customers saying, “We believe that all strong hair is beautiful, whether it’s straight, or curly, natural or in a protective style.” 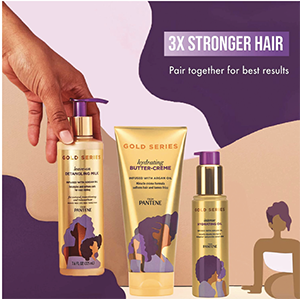 Beauty supplies should take note of the current trend. Starting with the Black Lives Matter, or BLM, movement In 2020 and the passage of “Creating a Respectful and Open World for Natural Hair Act of 2022” or the “CROWN Act of 2022” in the Congress, more is coming for the natural hair movement. Thin and kinky Black hair needs a specially tuned product and care to grow long and healthy. Previously in August 2021, BNB Magazine covered the natural hair care products for your read. 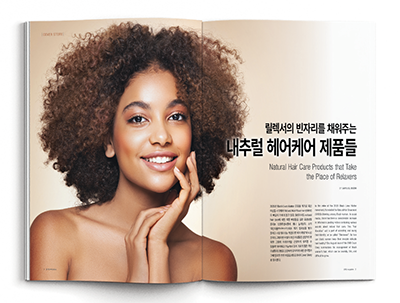 5) Social media activity: for beauty supplies to survive, a necessity rather than a tip!

Black population is relatively young. In 2019, more than half of the Black American were under 35. (Median age for White American was 43, and Asian American 38.) The majority of the population have enjoyed the digital life, and their lifestyle is geared to the digital environment.

The internet provided a level playground for every race and color of skin, and the Black community embraced it wholeheartedly. So Beauty supply industry needs to engage in social media marketing wholeheartedly. Most social media users use one or more platforms every day. The popular platforms by gender and race are as follows.

Among younger business owners, Facebook and Instagram marketing is already an established tool to promote their business and inform customers about sales events. If you tend to say, “I’m more into analog instead of digital”, change your mind today. From your kids, younger employees, second generation business owners, or even online posts, you can easily learn as long as you’re willing. This is not just about having common sense but surviving. Beauty industry is highly sensitive to trends, which means you will be left behind unless you keep changing.