Asking for Workers is Like “Asking for the Moon,” Beauty Supply’s Labor Shortage

Asking for Workers is Like “Asking for the Moon,” Beauty Supply’s Labor Shortage

Mr. A, a Korean in his late 50s, operates several medium and large beauty supplies in the southeast of the United States. He said sales of the first half of the year were up 20-30% compared to other years. Business is going well, so he should be pleased. However, a painful groan comes out of his throat. He is busy all day ripping boxes, carrying things, and displaying them in order to fill up the stands that quickly goes empty. His back is killing him and on top of that, he developed a toe-ache. He used to leave the store operation to the manager and rarely came to the store himself. This story is not limited to Mr. A’s store. This is a common phenomenon that can be seen in most beauty supplies. Since COVID-19 began, getting employees has become as difficult as “picking stars in the sky.”

Labor shortage are not limited to the beauty supply industry. The entire U.S. is now suffering from the worst labor shortage in history.
The U.S. employment report tell us this. According to the U.S. Department of Labor, 3.21 million people could not be hired even after posting job openings in April. As of April last year, there were about 9.29 million job openings in the United States. The number jumped 1.17 million from 8.12 million in the previous month. This is the largest number of job openings since they began to produce related statistics in 2000.

However, there were only 6.08 million people hired. It means that companies have failed to get 3.21 million workers. The gap between job openings and hiring personnel has nearly doubled in two months, from 1.74 million in February. As a result of a survey by the U.S. Chamber of Commerce, 90% of companies said that “lack of personnel is a setback to their business activities.” 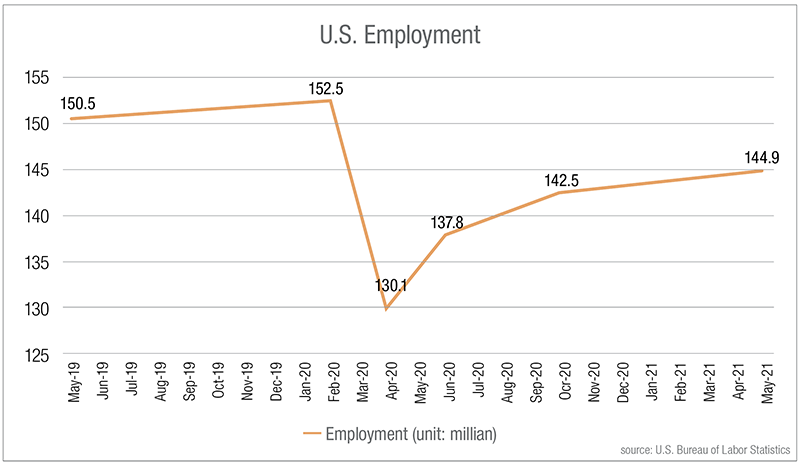 COVID Unemployment Benefits in 25 States are Suspended Early, but One-Off Benefits are Paid in Succession

The cause of recent labor shortages is said to be the Federal Government’s $300-per-week additional unemployment benefits paid to the unemployed through September 6 under the COVID-19 rescue bill. Who would want to get a job in a situation where the amount of unemployment benefits is greater than the amount you earn by working? That’s what the Republican Party is claiming.
Because of this, states where republicans are governors are rapidly taking measures to stop unemployment benefits early.  Of the 50, 25 states have already announced that they have stopped or will stop paying additional unemployment benefits early on.
Instead, some states have decided to pay one-time reinstatement bonuses. Arizona pays $ 2,000, Montana and Oklahoma $ 1,200, New Hampshire $ 1,000, and North Carolina $ 800 to $ 1,500. Connecticut which has a Democratic governor, also pays $ 1000 in reinstatement bonuses, and Colorado ($1200-1600) and New York State ($1200) are also pushing for payments.

In a situation where consumer sentiment and economic conditions are becoming active again, U.S. retail companies, which have been suffering from labor shortage, are giving their everything to recruit employees. As shown in the case below, they are raising wages or paying people just for taking job interviews.

The intensification of labor competition by these large companies is eventually exacerbating the labor shortage of small businesses such as beauty supply.

The Vast Majority of Surveyed Businesses, Currently Suffering from the Worst Labor Shortages

In May, the BNB surveyed 40 beauty supply stores across the country by telephone about the extent of labor shortages. The survey found that the majority of medium and large businesses, regardless of region, were experiencing serious labor shortages. 32 out of 40 stores answered this to be “The worst situation at the moment.” The same labor shortage phenomenon that is occurring across the United States is also happening in beauty supply as well.
The majority of small shops that responded to the survey were unable to get employees, so their family, such as spouses and children, are all helping to run their stores. They said to be struggling to make efforts to pass this time of hardship.
In addition, many stores closed at 7 p.m. and were operating shorter hours. Businesses that operate short hours officially announced that they will temporarily operate short hours due to the risk of COVID-19 infection. However, in reality, “It is just an excuse and in fact, we are forced to close our stores quickly because of labor shortage.”
The labor shortage of large beauty supplies was not much different. According to a hair company salesman, “I visited a large beauty supply in the South of the United States a few weeks after I ordered my goods and delivered them, and they couldn’t even unwrap the delivered boxes and just piled it up in the warehouse,” and described the seriousness of the situation.

In <Table 1>below, the extent of labor shortage for the stores that have revealed their minimum hourly wages in this survey is summarized. 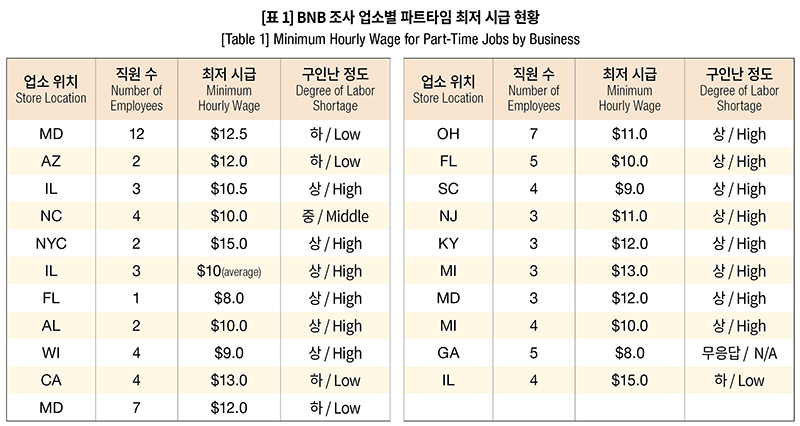 Despite this serious labor shortage situation, there are businesses that have managed to avoid this. Out of 40 companies surveyed, there were six businesses that responded that they were not currently experiencing labor shortage difficulties at all. What kind of working environment do they have that allowed them avoid the worst labor shortage phenomenon? Further interviews showed some common features in the work and welfare environment that the stores provide to their employees.

We asked employees who have been working in the beauty supply industry for a long time, “What do you want to improve in employee management to increase satisfaction and loyalty after employment?” and summarized the answers.