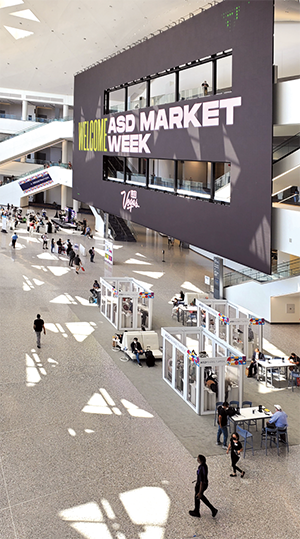 The show lobby was not so crowded.

Covid-19 pandemic forecasted to dwindle in this fall is dragging its lifetime with the spread of various variants. Schools opened for in-person class, and offices are opening for vaccinated employees who are encouraged to return to office, which are bringing some sense of normalcy to people. However, events and shows that gather a large crowd are still scarce. Consequently, Bronner Bro’s International Beauty Show set to be staged in Louisiana from August 28 to 30 this year was canceled after a month-long consideration involving many meetings. Louisiana is a region with a high rate of spread of the Delta variant, and the management company made the costly decision only days before the show’s opening date. In hindsight, it was a good luck out of the misfortune because during the same period, Hurricane Ida swept Louisiana. Participating venders and beauticians could have made a risky travel to the area impacted by the deadly storm.

Only in the preceding week, ASD Market Week 2021 was held in Las Vegas from August 22 to 25. This was a first offline merchandise show since the Covid-19 pandemic and ensuing social chaos, namely logistics failure, container shortages, and price hikes. The event is a biannual show ran in February and August, but earlier this year and the last year, they were canceled due to Covid-19.

More than 45,000 buyers from 90 countries visit the ASD merchandise show every year. It is a trade show with distinct categories of goods for buyers from a wide range of retailers including department stores, convenience stores, general stores, gift shops, distribution companies, and boutiques. In addition, the ASD merchandise show set it apart from the pack with a B2B exhibit called Source Direct trade exhibit where importers, distributers, wholesalers, and big box retailers can buy directly from manufacturers. 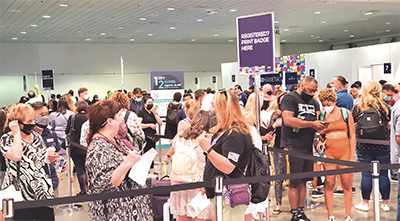 Buyers lined up at the entrance wearing masks due to Covid-19.

Let’s have a look around at the ASD show and find out what will be available in 2022 Fall and Winter.

The main players in the beauty section of the show were of course cosmetics companies. Because of the Covid-19 related mask-wearing recommendation, the cosmetics industry spent the first half of the year with comparative popularity of skin care products over make-ups. As the focus of the face shifted to the eyes due to the masks, eye make-up products were significant parts of the show. 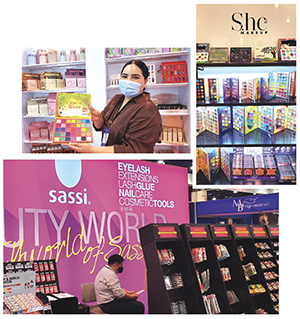 J Lash, based in California, participated in the event with an increased number of eyelash products while slimming down on the skin care products and beauty tools. They grabbed the buyers’ attention with a packaging targeting the winter and holiday season. 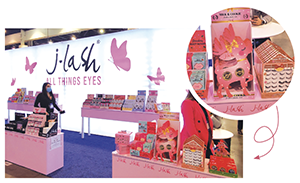 Laflare, based in New Jersey, introduced an eyelash product line featuring more than 100 styles. Laflare also introduced items to let your personality plainly show despite covering of the face with a mask, which grabbed many female buyers’ attention. The booth one of those consistently crowded with people, and the show’s host also visited the booth for a promotional interview to be filmed at the booth.

Eye makeup products predominantly occupied the beauty section, and diverse colors of eye makeup lines were released by many participating companies. Nicka K introduced eye shadow pallet that is already loved by many makeup YouTubers thanks to its various color combinations, in addition to hair tools and colors.  Edge products to clean up the hairline attracted the attention of the buyers with numerous offerings. 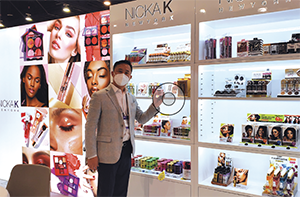 Taiwanese company Beauty Treats filled its booth with hair tools and eye makeup products, and it hinted that eye products with glitters were the best selling items. Aside from them, color cosmetics companies such as Callas, J cat, Amuse cosmetics, and Bellapierre leaned heavily on glittering eye makeups for the F/W season, and their packaging and colors showed off glamorous hues. 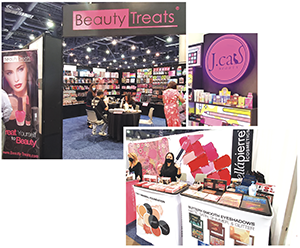 Throughout the three rotations and in the entire show room, a booth was particularly busy with a heavy traffic. Headquartered in Arizona, DNA Hair Tool was at the center of the attention throughout the entire event. Staff members wearing a white uniform and blond hair applied curls on visitors’ hair with ease, and distinctive shapes of hair tools made it truly easy to make curls and straighten the hair; even I could make good curls despite clumsiness. As opposed to the hairbrush shaped hair tool already on the market that was prone to catch hair because of silicon material used, this comb-shaped tool allowed the hair to be straightened up with a single stroke. Thanks to the heat protection design of the hair tool, the hot surface could not physically touch the hands or skin, preventing injury. Despite the high price, $270, it grabbed a lot of attention. 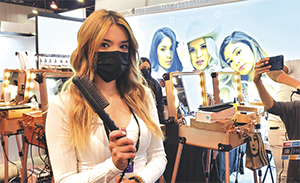 The ASD show covered a large variety of accessories in addition to the beauty products, so you could peek at the fashion trend in upcoming F/W season. 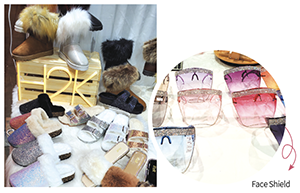 Due to the unpredictable changes in the supply chain and chaotic distribution in China, Source Direct exhibit had unprecedented numbers of booths rented by Chinese companies. Turkey room was filled with chemical manufacturers, and Korea room had accrued the most participants along with Kotra.

In addition, the ASD show presented cash-and-carry accessories and jewelry companies, but it was not as crowded as pre-pandemic. Nonetheless, the supply shortage due to sourcing hardship in China and Southeast Asia countries had caused many buyers looking for a stable supplier for sourcing, making a highly lucrative show for venders.

As many recognizable names were missing from the show, the CosmoProf North America scheduled on the next week was also pretty low profile.
Because of the anticipation of long lasting supply chain disruption, many preorders were reportedly placed during the ASD show. Let’s have a head start in procuring for the year-end items, so your customers may enjoy a splendid holiday shopping season.