Hair Plus Wigs at Minneapolis, MN 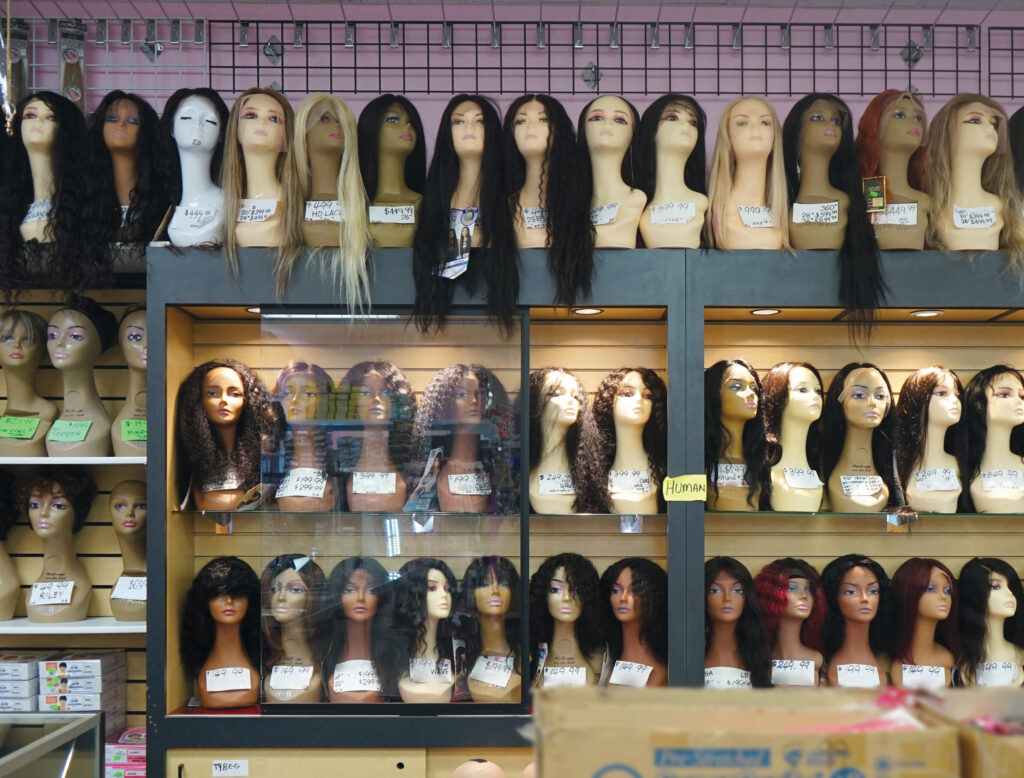 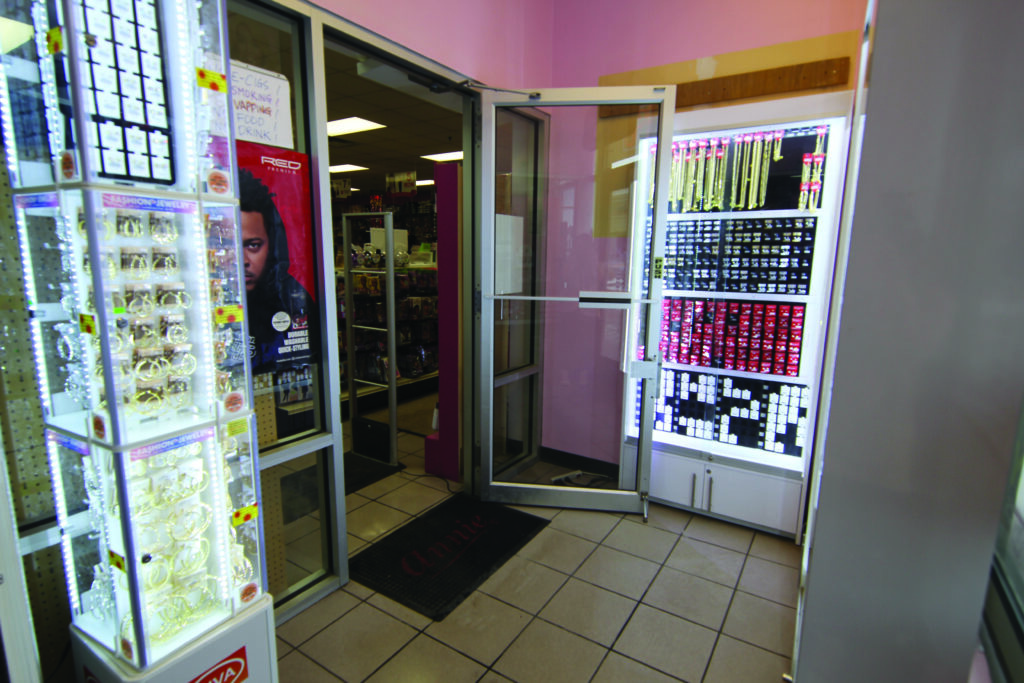 Jewelry display at the entrance brightens up the sales floor.

In a not-so-big 5,000 sqft retail store, hair products fills the majority of the shelves catching your attention. Wig prices are easy to notice, and expensive human hairs are displayed without locks. We are in Minneapolis to learn about Hair Plus Wigs, a beauty supply retail store owned and run by Mr. Dongsun Suh. Like the store name, the store carries a wide variety of wigs, braids, and weaves. This Minneapolis Brooklyn Center location is not just one of three stores owned by Mr. Suh. He has explained his special affection for this location with a saying that it is the most profitable and successful branch. 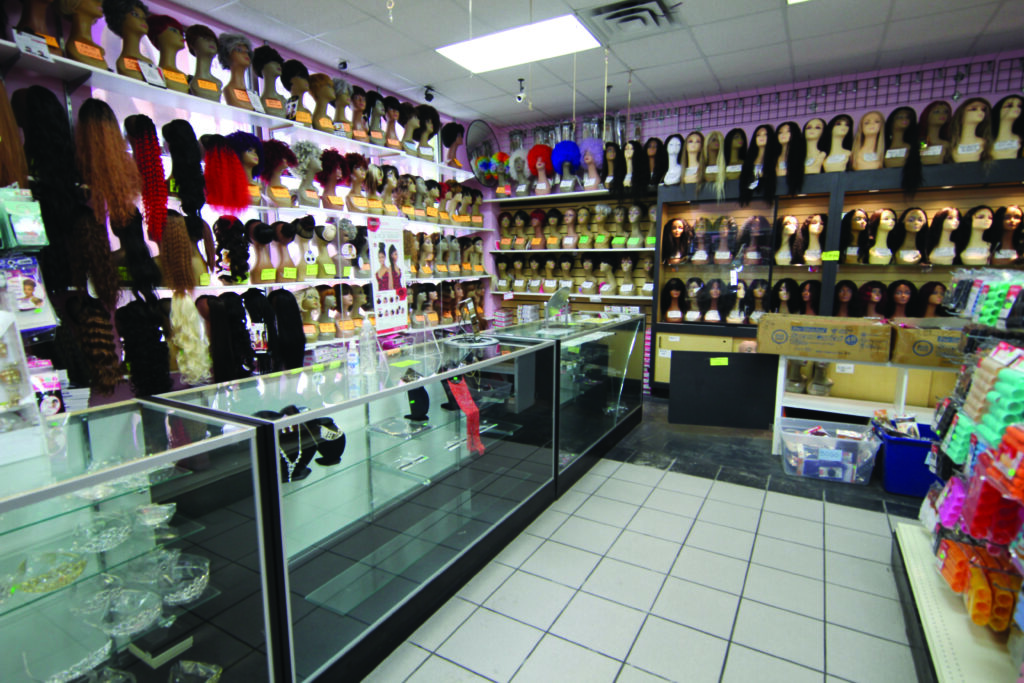 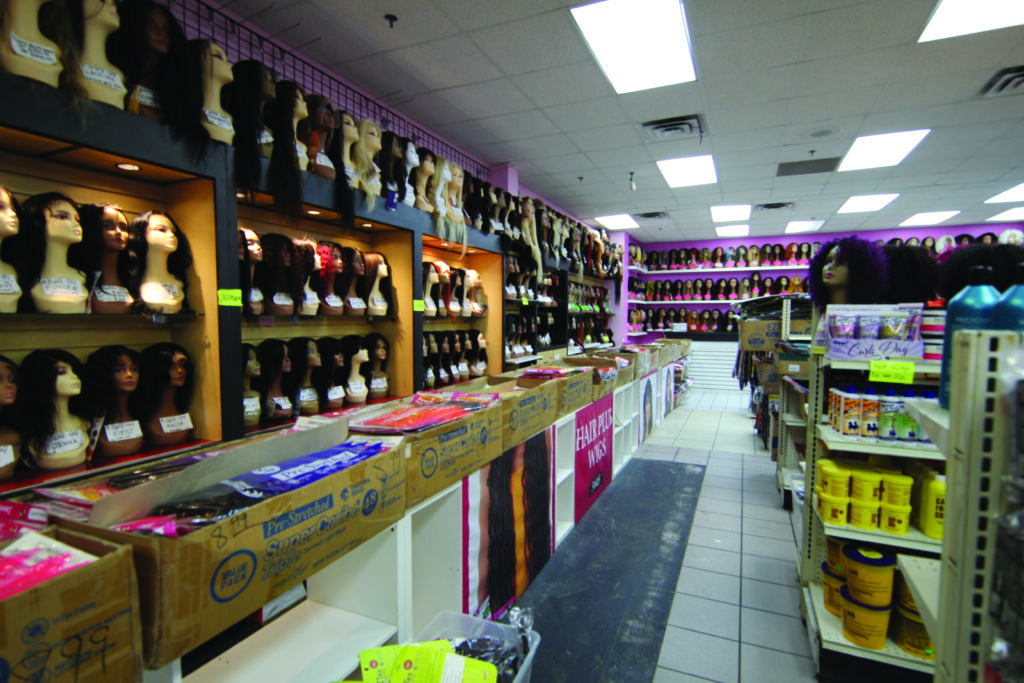 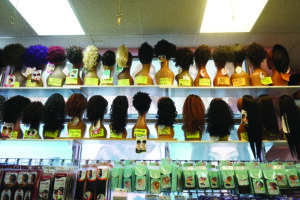 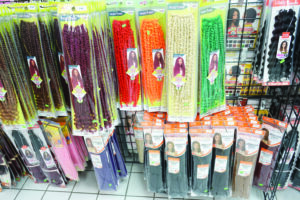 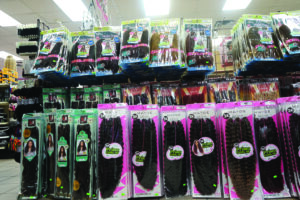 Mr. Suh introduced his beauty supply retail store as a hair store. While accessories and chemicals are carried, wigs are the focus of the business. Keeping the main frame of traditional beauty supplies, it wants to become the first store you think about when you need to shop for a hair product like wigs. Two other stores operate with the same principle. Various wig mannequins are displayed, and the staff is well trained to assist customers to find the wig they want and can get outstanding service like providing a small piece of lace when asked about a sample. You can easily find stories about its outstanding customer service that led to satisfactory wig purchase on Google Review.

Even the most high-end wigs are displayed without locks so that customers can see and feel the product freely. Despite the risk of theft, customer satisfaction is the priority. As you can touch and feel the hair, you can have the shopping experience you expected. While demand is one of the reasons to have a wide array of high-end wigs, another reason is to give an impression that “the store has good quality, expensive wigs.” Mr. Suh says, “we want to be the store that you shop at your happiest moments of life.”

He hired a boosting company to make his business a top Google search result in Minnesota, and the social media campaign is also focused on hair. Comparatively, clothing takes a small share. Aside from seasonal goods such as Obama T-shirts, he makes an effort to maintain the focus on wigs.

Wig prices at a glance! 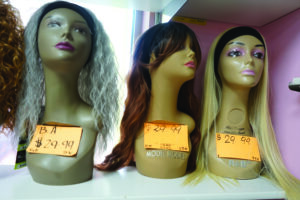 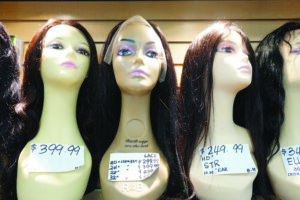 Hair Plus Wigs stores mark their wig price using color-coded tags based on price range. Written in big letters, the price is easily noticeable from distance and customers can find wigs within their price range easily. Human hairs are in white, synthetics are in orange, and so on. The color codes help customers and staff alike in finding and identifying wigs correctly. 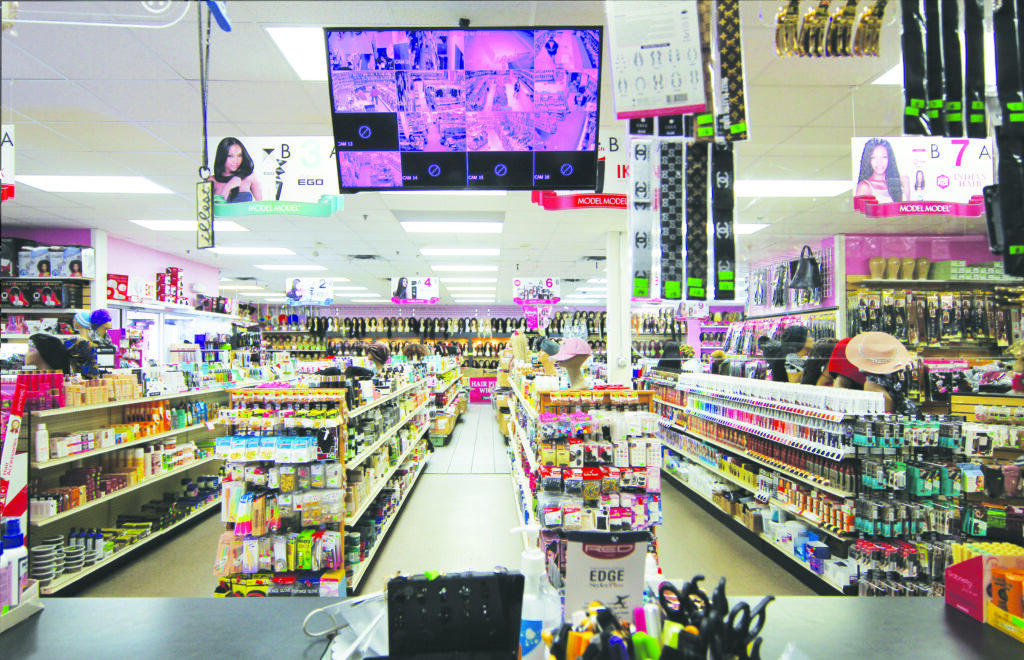 Overview from the cash register. You can see through the end of display units. 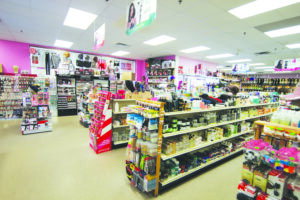 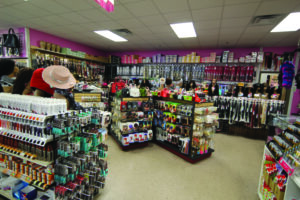 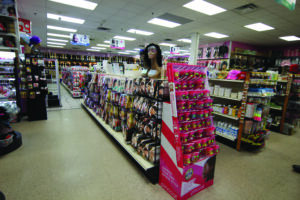 What about theft risk for unsecured expensive wigs? Mr. Suh has specially ordered 4-foot-high display units so that employees can see the entire sales floor from the cash register. The unblocked view helps managing the store, and security cameras installed in various places can be viewed from the cash register on a large display. Theft does happen from time to time nonetheless. Mr. Suh says, “no matter what, you will loose some.” However, he intends to keep the current display. 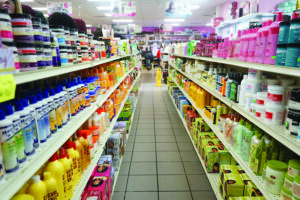 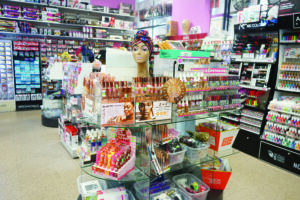 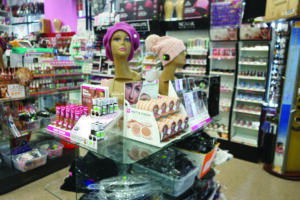 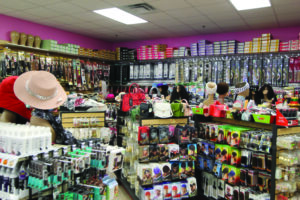 While 50% of the merchandise is hair, the other half cannot be overlooked. Neat display and bright interior is packed with a variety of goods to meet the customer demand.

Secret to get a regular customer? Discount and good customer service 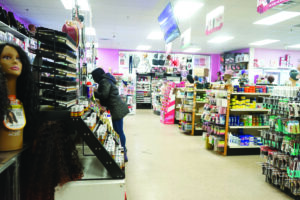 When asked if Hair Plus Wigs has any special ways to keep customers, Mr. Suh says, “although it’s nothing special, we issue Thank You cards.” About the size of a business card, this is a variant of stamp cards. 5% discount at the sixth visit to the store is rewarded, and 10% at 11th, 15% at 13th. In case of customer complaint or disputes with staff, he usually takes customers’ side and lets them have their ways. Although not always the staff is at fault, he tries to make the customer happy first and then worry about the staff later. Employees are trained to avoid dispute and not to raise their voices.

Mr. Suh says, “no amount of kindness will be enough for people with bad intention, but you have to make your best effort to be kind to customers. In the past, I often stood on my ground against customers, but nowadays, I try to be a generous business owner.” Overall, it is a local business. Mr. Suh has a business principle in which you do not make an enemy in the town because you cannot avoid meeting them again.

Started business as a hobby, but now he dreams of franchise

Solid core in business management basics and generous mind as a business owner. How did Mr. Suh become a beauty supply owner? Mr. Suh came to New York with his parent who was sent to overseas office in early ’90s. After graduating college, he attended an import and export company. Busy work and unsatisfactory pay made his life in Manhattan a tough one. Soon he followed his friend to North Carolina to find a construction gig, and he learned that Minneapolis issues the most construction permits across the U.S. He moved to Minneapolis and worked at construction for ten years. The Collapse of Lehman Brothers made him rethink about his future. His family members have also grown bored of the everyday life in Minnesota. In search of activities to revitalize daily life, he bought a beauty supply business from a retiring business owner. It was supposed to be a hobby for him and his family, but the business is now expanded to five retail stores. Two of them closed after the riots triggered by the death of George Floyd. He is now fully into business management and dreams of making next Sally Beauty.

Riots, not a crisis for the business 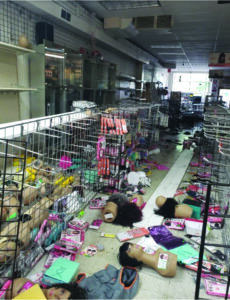 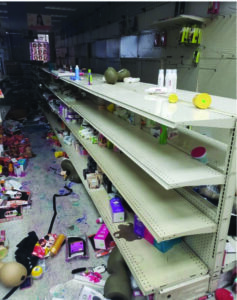 Aftermath of the May 2020 riot inside a Hair Plus Wigs

Two large riots following the death of George Floyd have heavily damaged two of the retail stores owned by Mr. Suh. One of them was even set to fire. When asked if it was his biggest moment of crisis, Mr. Suh did not agree. Investment in insurance coverage was a huge help. Mr. Suh says, “when we opened the business for the first time, we did not invest much in insurance premium despite knowing the importance.” Hence, one of his stores was set to fire, but most of the loss was not covered. After the incident, Mr. Suh boosted the insurance coverage.

When the next store was damaged by the rioters, he could receive enough money to cover the previous loss. He raised coverage for items for a location where retail space is rented. For a location at a commercial building owned by him, he included all options including damages to the exterior so that he can recover fully from any loss. Mr. Suh says, “riots do not happen often, and the next could be in 10 or 20 years. But having an extensive insurance policy made my worries disappear. Having more coverages do not necessarily raise the monthly premium as much, so you should research it.”

The real crisis was in the early, depressing days of business.

Mr. Suh faced the toughest hurdle while preparing for the second store. Despite cash shortage, he had to increase the inventory. At the same time, a competing business pressured the wholesalers. Invoices piled up, and there was limit to just deal the situation. Due to hardship, he had depression and barely managed it with prescription drugs. After two years of hardship, the cash flow improved. He was a passionate young man and not afraid of anything. After the endurance, his business expanded, and now he is comfortable enough to help others in need with donation and other assistance. He is taking care of people around him and financially assisting people with vision. Although he is now financially comfortable, the hard days are still a dreadful memory. 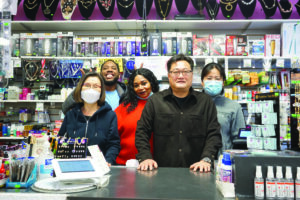 Mr. Suh is very optimistic about Minnesota. 90% of population is White, but low-income families receive good benefits along with health care. Racial discrimination is relatively less severe, and interracial marriage is reportedly common. In the end, African Americans in Minnesota does not only respect their own culture but also others’. Most White population is of North European origin, and many African Americans in Minneapolis came from Somalia as refugees.

The death of George Floyd somewhat unjustly characterized the racial tensions in the region. As one of the Northernmost states in the U.S., the winter is harshly cold. On the other hand, people love to party and attend comedy clubs, so the demand for wigs is high. Mr. Suh sums up with saying, “while many think of it as a rural area, Minnesota is one of the affluent regions, and the future is bright for businesses.”