Now with a son! Fresh Start with the 4th Store

“Feel the Beauty” at Hampton, Georgia

In Southwestern Georgia, the City of Hampton lies a bit farther down south from Jonesboro which used to have a substantial Korean population. If you exit the highway and drive a little further, you will see a large building that is fairly visible from a good distance. A stand-alone building with quite sizable square footage offering a wide access way to the parking lot—this place is occupied by Feel the Beauty beauty supply retail store opened last April. 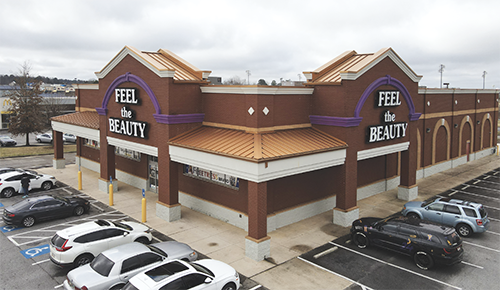 The store opened at 10am, but a bit earlier at 9:40am, some customers were waiting for its door to open. They waited in the car until the store’s door opened. Soon, they entered the store with smile on their face, and we followed them into the store.

The retail place was bright and clean. For the size of 12,000 sq.ft. retail floor, a bit overwhelming amount of merchandise filled the room but with zero impression of messy. To the contrary, neatly displayed products organized by category were welcoming the customers. Due to the bright lighting, the entire store looked clean and shiny. Flawlessly aligned products and spotless shelves caught our eyes.

The entire floor was navigable by a small shopping cart, so it looked quite convenient to shop

1.Chemicals lined up in straight lines / The ceiling lights and light fixtures were unfiltered to raise the color temperature, making the atmosphere even more livelier / 3.The overview of retail floor

As the store opened, every staff members started to move around in a coordinated fashion. I thought “there is a reason that the retail floor is so clean.” The retail floor was staffed with 15 employees including part-timers, which was relatively a large group for the size of the store. Everyone started the work day at their designated spot. Its manager was a 20-year veteran, and she started to make the rounds of the entire store checking on every point. Other employees cleaned up the retail floor and welcomed the customers. The business owner Sunghyun Park moved along with the staff just as busy. To make a spotless retail floor, everyone worked in harmony.

Smart interior focuses not only safety but also esthestics.

We knew it was a clean store at a first sight, but when we looked around, we could find many signs of going above and beyond. Even a mundane place was not left untouched. Beauty supplies tend to carry a lot of merchandise despite relatively small sizes, so you don’t need a great mess to look messy. Due to the fully packed merchandise, the retail floor often appears dark and gloomy at times. This encourages shoplifters to easily target beauty supplies.

Feel the Beauty store gave an impression that they anticipated this and prepared for it. The thorough security could be noticed by transparent sensor antennae at the entrance, shopping carts that have bars taller than the entrance door, an open layout allowing cashiers to watch every corner of the store, and security cameras that monitor the floor throughout.

Merchandise organization utilizing every nooks and corners was impressive. Slightly tilted shelves allow a large number of hair products to be hung without sagging, and chemicals were placed on top of the glass shelves for a clear and lighted view of the products underneath. Displaying units have different heights, so if you look from the front, you can see items in the back more easily. 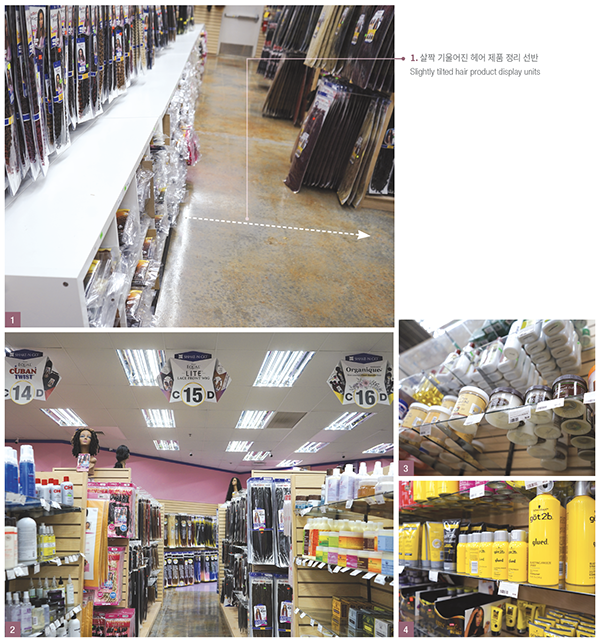 1.Slightly tilted hair product display units. The tilt allows the stacked products to be moved inwardly for an even tidier look / 2.Glass shelving units can support the products while they allow light to pass through so that it is easier to check the color and package of the products / 3.Back rows of the shelves are slighted lifted, so the viewer at the front can see the items in all rows at a sight / 4.Popular items were placed in the golden line / 4.

Hair products amounted about 35% of the entire merchandise, and the organization of hair products attracted our eyes as well. Pricier hair items were placed on the side of the cash registers, and items with a significant length could be viewed at a single sight. Hair mannequins wearing wigs were placed at the eye level of customers. 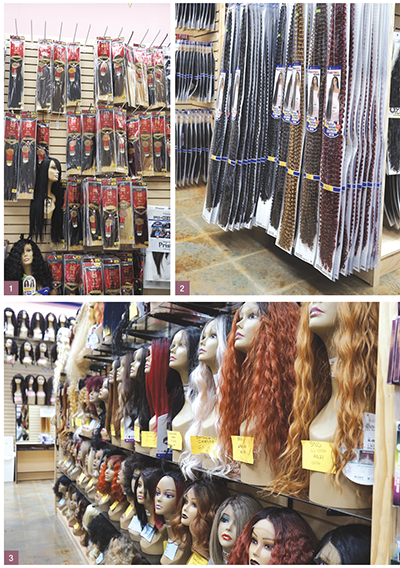 1.Even a bulkier item can be hung easily with a long hooks / 2.Display units that hang lengthy products / 3. Hair mannequins in a straight line

5.At the end cap of the wig corner were extra long wigs that could not fit into the display units / 2.To allow an easier color comparison, the comparable items are slightly facing each other

As we learn more and more about the store, we sensed the apparent retail expertise. Now we have to know who is Park.

“My trade secret? I was lucky.”

Sunghyun Park with a small stature and gentle look runs two retail stores under the business name Beauty World and another two under Feel the Beauty. The first two stores were named Beauty World, incorporating her wish to create a world of beauty. When she got the hang of beauty supply business after opening and running Beauty World for a while, she felt like she knew what was the beauty. So Feel the Beauty name was created.

We asked what’s the secret of running four successful beauty supply stores. Feel the Beauty Hampton was right on track of attracting customers shortly after its grand opening thanks to word of mouth, so we figured she must have something special. However, Park said “there is no secret.” When asked if there was a secret to the success, she simply said, “I was lucky.”

Business owner Sunghyun Park used to work as a medical tech after studying Biology at college in South Korea. She learned the entirely new trade after she immigrated to the United States. After marriage, she accompanied her husband to Chile whose work required relocation abroad, which was the start of her foreign life. In Chile, she lived four years raising kids. When it was time to go back to South Korea, she was concerned that her kids might have a hard time adjusting to South Korean life. She decided to move to the United States.

In 2003, she sold magic scarves, once a hot item in South Korea, in flea markets. They sold like hotcakes, and Park gained confidence in business. As her second business venture, she sold underwear. The streak of success brought her enough money to start a business, and she combined that with her three years of work experience as a beauty supply manager to open a beauty supply retail store. It was the fifth year after she moved to the US.

When she opened the store, her children were all young. As she raised her children at the store, the first word her daughter learned was, reportedly, “May I help you?” How tough must her work and life balance had been? She grew her business as her kids grew, and she came this far to open the fourth branch. Business owner Park, instead of reiterating her hard work, simply spoke down of her tough life by saying she was lucky.

Her business operation had been relatively smooth, but it was not without some hiccups. When asked, “what was the toughest thing?”, she responded “employees.” When she found out that an employee who was working with her since she was 16 years old was stealing merchandise, she did not report it to the police but had to let her go with heavy heart.

When the employee reported to work with an item familiar to Park, it was definitely a stolen good from the inventory. But the employee claimed her boyfriend bought it for her. It was tough to face a long time employee like that. In the end, she accidentally found a security camera footage of her stealing store goods while investigating a separate shoplifting incident. She told her “I won’t call the police, but you cannot work here anymore.” “It’s hard to see you like this” was Park’s last words before sending her home. Park knows the employee moved on to find a job and live a good life, but the memory still haunts her, as shown from her painful smile.

Her business philosophy was rock solid. “I don’t think it’s my store or they work for me, I would rather think they are my family.” Despite her painful memories involving employees, she had more trust and affection toward people than distrust. She bought a car for a Black manager who has been working for ten years at one of her stores. Park said, “she helped me a lot for opening a new branch setup” expressing her unconditional faith.

Is that why? The manager at the store spoke very highly of Park, in fact almost exclusively of her, when asked about what is good about the store. If you take a closer look, no one in the staff was working with unpleasant facial expression or mood. Park said she could have this kind of attitude because of her husband who always said, “let’s give them one more”.

Now together. Her son joins the family business.

We could find a young man who is working on menial tasks without complaining. It was Park’s son. He had served the US military and joined the family business since last year. He grew up watching his mom running the beauty supply with very little free time. As if it is a reward for her lost years in her devotion to the business, her son came back to her work life. 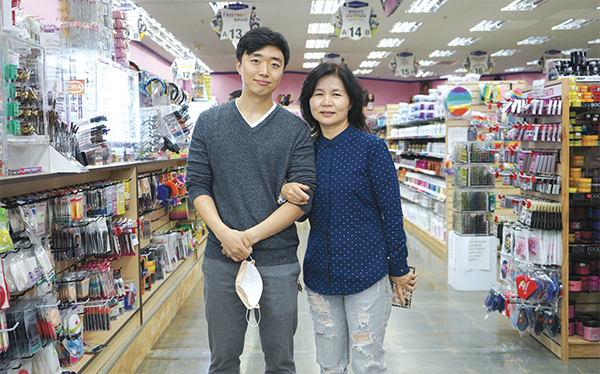 Both have the same nice smile and know each other’s thought without saying. After her son joined the business operation, she’s gotten more relaxed. She goes on a trip with her son once a month and commute to work with her son everyday. That is a precious gift for these two who did not have much time together back in time.

He used to wait till 10pm for Park who could only come home after closing her store at 9pm. The late dinner was a regular thing for the young kid who is now helping to reduce Park’s workload.

Although he got admitted to a dental school, he decided to stay with his mom. Park’s diligence and business sense passed down to him, and despite being a relatively new comer, he is playing various roles at the store.

Although Park says she was lucky when asked for the key to her success, that was definitely not it. Her family members who supported her through the hard time, her outstanding sense in business and fashion trend, her sincere approach toward employees, years of diligence ever since her immigration, and near-perfect store management with her attention to detail, Feel the Beauty could exist because of all these happening at once. A successful retail store always has a reason for success.