Beauty supplies carry a wide variety of goods from hair products to clothing and accessories, serving as a neighborhood department store. Their appearance can be quite unique depending on the size of the store and the preference of their business owner. A store with limited storage space may have piles of merchandise from floor to ceiling, and a display hook is sometimes overloaded with goods making it hard to browse and sometimes even fail to withstand the weight.

Although all retail business owners realize the importance of display, many beauty supply retail store owners hesitate to update their retail space because beauty supply stores typically have long store hours and carry a large amount of merchandise. Would it be so hard to renovate display units or go through remodeling while operating the business? We met Sungjin Jo, the business owner of Waba Beauty, which contracted Sky Display to do remodeling of the retail space. 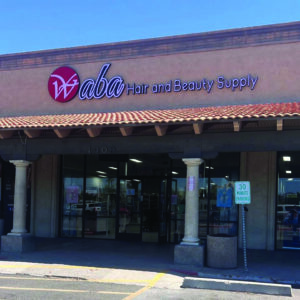 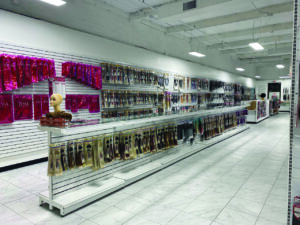 “A total makeover. Customers like it more than I do.” 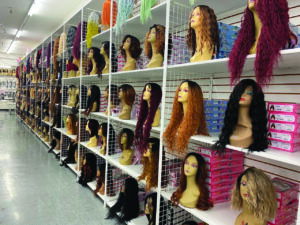 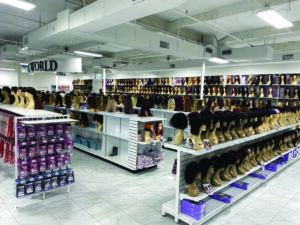 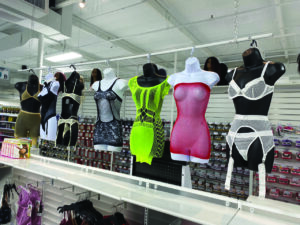 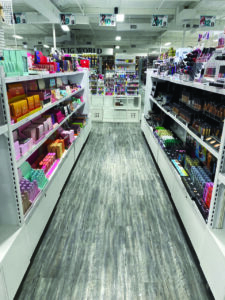 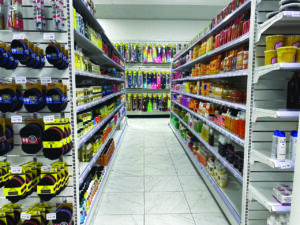 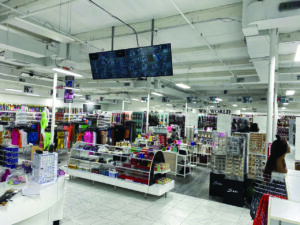 Sungjin Jo (38) runs five beauty supply stores in Phoenix and Tucson, Arizona. The young business owner renovated two retail branches this year. A location in Phoenix was a newly opening store, which made the construction project relatively easy, but a location in Tucson was handed down from his parents and underwent remodeling while the business stayed open. He ordered display assemblies from Sky Display, a company located in Georgia specialized in display fixtures, and Mr. Jo built the display units himself with assistance of hired hands. It took a week from start to finish. Although he tried to avoid peak hours by working in early mornings, inevitably day operations were affected. When asked about revenue loss, Mr. Jo answered that they worked on display shelves one by one and attentive retail associates rendered help to the customers who looked for goods affected by the construction.

Mr. Jo said, “it is an aged retail space that had no update for a long time, and the old shelving units were about 36″ to 40″ wide, occupying too much space. The retail space is relatively small as well, so we wanted to make it more efficient.” After the wide display shelves were removed, the aisles looked cleaner, which was noticed by customers who welcomed the new look. In fact, if you look at Google Reviews for many beauty supplies, store display and organization were deciding factors for the rating. If the goods are identical, customers will likely shop at a highly organized and clutter-free environment, which cannot be provided by online retail.

“Anyone can do. It’s not difficult.” 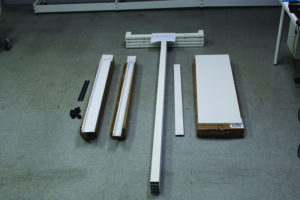 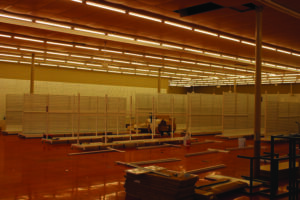 If you are a frequent visitor to beauty supply trade shows, you must have met Saeyoung Kang promoting his products passionately in a booth. In the end of last October, Mr. Kang was seen at UGBSA Beauty Trade Show where he was hearing about clients’ needs and providing consultation to retail business owners.

Mr. Kang has worked with beauty supply retail stores for a long time, and his seasoned expertise created Sky Display’s proprietary steel slatwall products. Many beauty supplies that opened years ago have used wooden slatwall, which is neither structurally stable nor durable. The answer was replacing the material with 100% steel. The easy assembly is another merit of Sky Display products.

Currently, Sky Display is headquartered in Georgia, but products can be shipped to anywhere in the country within a week. All you must do is to choose size and quantity for the retail space and submit the order form. Of course, an on-site consultation can be scheduled if requested. From a handful of display shelving units to a store-wide remodeling, the consultation is free if it results in a contract. Consultation is a total care service taking various factors such as business owner’s taste and regional characteristics.

Mr. Kang says, “remodeling is easier than you think, and you can work on a section at a time.” He also advises his clients that “many business owners running a retail store without update have kept aging gondola displays, which can be simply removed and replaced step-by-step to renovate the whole retail floor in a short time at a reasonable cost.” 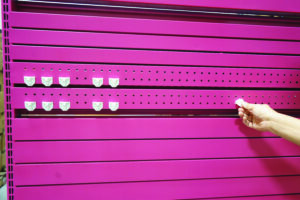 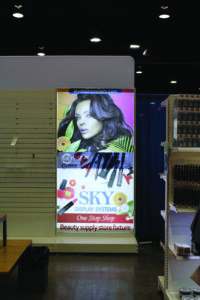 Lately, many beauty supply owners across the country have realized the importance of display and contacted Sky Display. Sky Display’s steel slatwall comes in white by default, but you can add a point color or order a custom color. The paint is applied with sophistication you can find in motor vehicle assembly lines. When paint is applied by brush, it can easily peel or damaged. Thus, the special technique is employed. If you order a set of products in various colors, however, the order will be fulfilled in about three months.

You can add light boxes, hooks, faceouts, iron shelves, and glass shelves per your preference. Sky Display also supply light box signs, table displays, wig cabinets, and gondolas. The new trend is warehouse racks often found at retail stores like Costco and Sam’s Club. Mr. Kang says, “you often find boxes of merchandise on the floor, especially hair products, and you can store these boxes at the top of the warehouse racks and display goods in the middle.” The warehouse racks require 120″ clearance with respect to ceiling height. As beauty supplies are getting larger, many retail stores with a large retail space should consider the warehouse-type displays. Mr. Kang says, “beauty supplies are undergoing a lot of changes, and remodeling should happen as soon as possible.”

After completing renovation of two retail spaces, store owner Sungjin Jo is convinced that “you should not be stingy when it comes to the retail space” and has made good progress in delivering goods in partnership with UberEats and DoorDash. A next-gen business owner who is savvy in social media and working hard to satisfy customers. Let’s talk about his story and his business management.

Mr. Jo’s parents opened a general merchandise store in 1999. Mr. Jo was still a student when his eldest brother bought out the store in 2001 and converted it to a beauty supply store. In 2010, his mother passed away. By then, he graduated college in New York and was working at a company. His big brother called and asked for his return to Arizona and to help with running the business. While helping his brother, he got interested in the business and opened a second store with him in Tucson. Today, the business has grown to a five-store chain. Meanwhile, his father and his eldest brother passed away, but Mr. Jo and another big brother continue the family legacy. 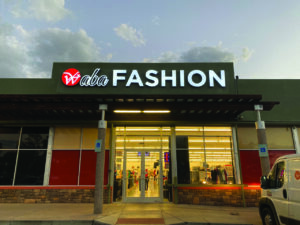 Mr. Jo, who majored in marketing at college, described himself as “overachieving.” He never settled for continuing the family legacy but tried new ways and adopted new things. He opened a beauty salon, acquired a clothing company, and currently runs a 28,000 sq.ft. retail store called “Waba Fashion” with 20,000 sq.ft. of retail space filled with clothes.

Being a younger generation, he is focusing on social media marketing. Facebook and Instagram marketing is Waba Beauty’s core business wing. Promotional events at stores have gathered a large crowd, and currently the business has 10k followers on Instagram and 34k on Tiktok. Each store has its own Facebook page, and a dedicated employee manages them. Online sales is another core business. Aside from its own e-commerce website, wabahairsupply.com, it is partnering with Amazon, Walmart, and Etsy. 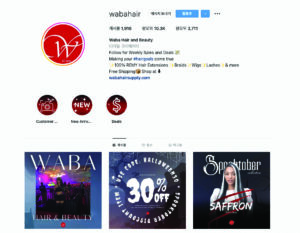 Delivery service via DoorDash and UberEats

Now you can order beauty supply products on DoorDash. Waba Beauty is the first beauty supply to list its goods on DoorDash. The need for delivery service came to his mind after seeing beauticians make frequent visits to his store. Many beauticians come back when certain supplies run low and complain about them, and Mr. Jo thought that it would be great if they don’t have to come to the store themselves. His idea was to utilize preexisting platforms.

The first is always not easy. No beauty supply ever offered goods on DoorDash, so people from DoorDash made personal visits to the store, took pictures, and checked the inventory. The process alone took six months. Currently, the service is offered at all its five branches. In a region with large Latino population, eyelashes and wigs are popular, and in another which is a primarily Black community, braiding and edge controls are popular. The business is steady; 5 to 10 orders per day are received. 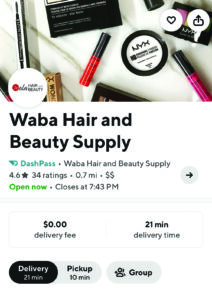 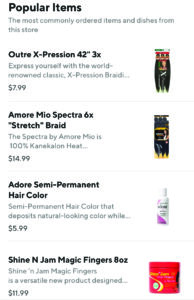 His top priority is having an open mind with customers.

During training, Waba Beauty employees learn how to greet customers. Instead of a dry “hello” or “hi”, they are encouraged to take a more proactive stance. For example, they would greet customers with “what’s up?” or “what are you looking for?”. Of course, with a smile. For the background music, it is always the upbeat high tempo music reminding of a night club. Mr. Jo thinks customers buy more when they are in a good mood.

He says, “although I learned a lot from my parents’ business management, there was one thing that I did not like: quickly raising suspicion of theft. Yes, shoplifting happens, but that’s 5% of the shoppers.” “You shouldn’t sacrifice 95% of customers because of the 5%,” he explains.

At Waba Beauty, all merchandise is displayed in open case, free to inspect with hands. No locked displays. The brief suspension of wig try-ons during Covid-19 is now lifted. Of course, security measures are implemented. Phoenix location contracted a security company, and other locations have security officers on duty. But all measures are taken with utmost care not to cause discomfort to customers.

A funny thing Mr. Jo do to reduce shoplifting is uploading security camera footage of theft occurred at Waba Beauty on social media. He wants to raise awareness among people who often get into fights or stealing goods at the stores.

Do spend money on people 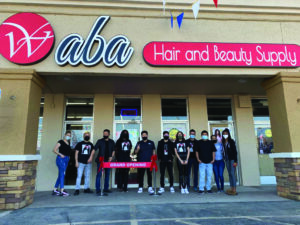 Mr. Jo emphasizes that you should not get stingy when it comes to the retail space. Similarly, he believes it’s important to spend money on people. He referenced the Samsung management and said, “employees don’t get angry for hard work if they get paid enough.” He hints that his stores pay higher wages than other beauty supplies. During the economic struggle due to the Covid-19 pandemic, he did not fire a single employee but gave bonuses. He spent all available cash for inventory, and everyone kept their usual work hours. When there is an issue at the company, he listens with open mind.

He has been practicing social responsibility in the local community since 2014. Initially, he provided cash assistance to struggling business in the Tucson region $1,000 a month. Now, he is providing about $5,000 a month to Black-owned business in the Phoenix region. In remembrance of his mom who passed away from cancer, he is also supporting cancer centers. 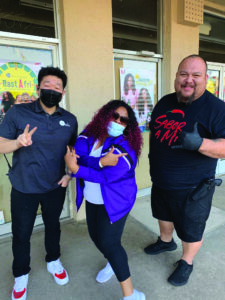 Mr. Jo has expanded the single store business into five-branch retail company. Now he dreams of an expansion beyond the current market. In addition to the five locations, he plans to open more retail stores. He is eyeing for other regions than Arizona. “I’m still young. I’ll probably run the business for next twenty or more years. I want to try more new things for further growth.”